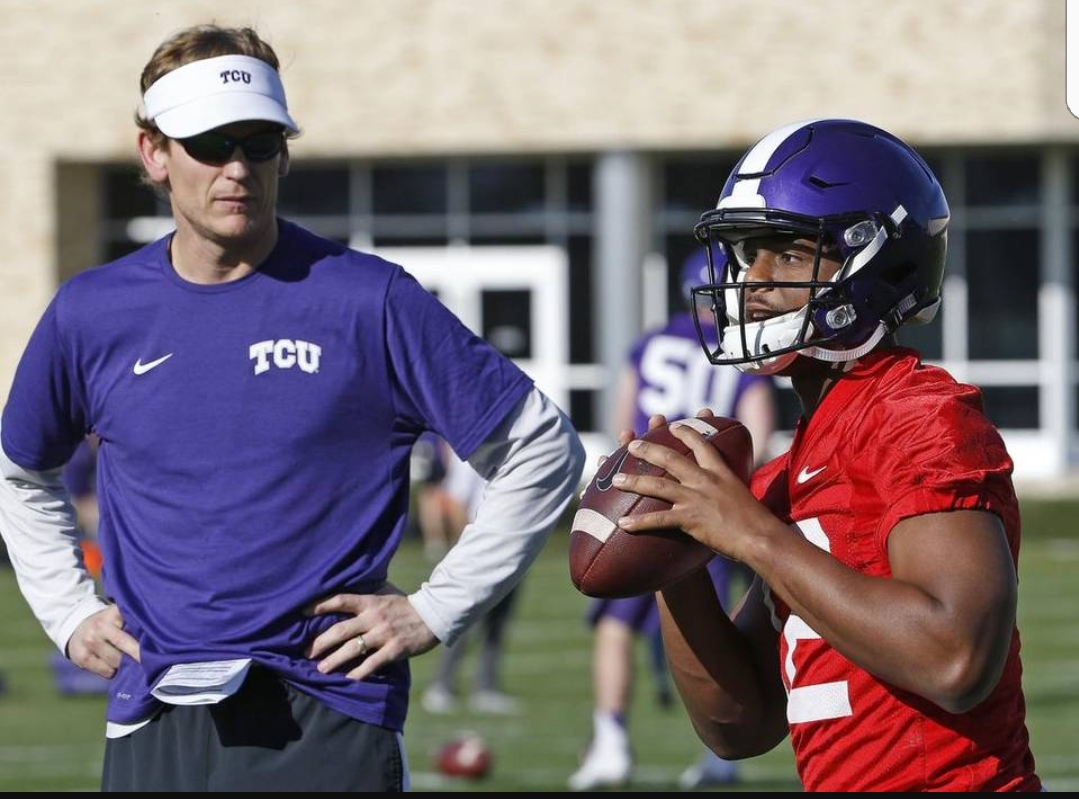 print
TCU head coach Gary Patterson claims the main reason sophomore quarterback Shawn Robinson was one of the team’s five representatives at the annual Big 12 Media Days in Frisco, Texas, is because of superstition.

Yet, however much Patterson may claim that his reasoning was purely superstitious, all signs point to Robinson being TCU’s starting quarterback heading into 2018.

For starters, Robinson is the only quarterback on the roster with collegiate game experience. He appeared in six games during his true freshman season, including a start for the injured Hill on the road against Texas Tech. While his stats won’t blow you away, 6 of 17 passing for 85 yards and a touchdown along with 85 yards rushing, the team won 27-3.

“Obviously he’s the guy that’s played the most games,” Patterson said. “He played in six and obviously he started, which is a hard place to play, he was able to win in Lubbock this last year.”

While starting one game and appearing in mop-up duty for five others may not seem like much, it’s far more than his competition. University of Pennsylvania transfer Michael Collins has attempted two career collegiate passes and first-year quarterback Justin Rogers was in high school a year ago.

If Robinson is named the starter, he will lean on his experience, especially as the Horned Frogs travel away from Amon G. Carter Stadium for three of their first four games.

“It’s huge,” Robinson said of his start against Tech. “Without it, I don’t know where I’d be. It gave me a gauge and how I feel I am with the other players. It helped me figure out what I need to work on, the weaknesses, the strengths, honing in on my skills.”

Robinson continued to build on his freshman experience with a strong spring, one in which he split reps with Collins and showed teammates his dual-threat capabilities.

“When the play breaks down, he can run, he can throw,” senior receiver Jaelan Austin said of Robinson. “He can find the open guy, his vision is terrific. He just has a knack for making plays.”

Robinson’s playmaking ability will only be strengthened by the abundance of explosive skill players around him. Running backs Darius Anderson and Sewo Olonilua combined for over 1,000 rushing yards last season while Austin, sophomore Jalen Reagor, and senior KaVontae Turpin anchor a receiving unit filled with speed.

Patterson talked about this speed on offense, which when combined with the “vertical capabilities” of all four quarterbacks will add a dimension in the passing game that was missing the last two seasons with Kenny Hill.

Austin added that the more downfield vision from Robinson, Collins, and Rogers is going open up the offense for its playmakers.

“You got a lot of playmakers on the outside that can go,” Robinson said. “I’m just gonna try to get them the ball.”

Leadership is a quality that all quarterbacks must possess and one that Robinson, with help from Patterson and Cumbie, has been developing since his first day on campus.

“Fresh out of high school [Cumbie] had to grow me up,” Robinson said. “The importance of the way I carry myself, the mental part of the game, I had to make it important.”

Especially on a team that lost senior leadership from Kenny Hill, Kyle Hicks, Nick Orr and Travin Howard, leadership is as needed as a new starting quarterback.

“One of the things with Shawn or any of them [the quarterbacks], if you don’t bring them to media days you’re not saying they’re one of your guys,” Patterson said. “It’s hard for them to have leadership if you don’t think that way of them.”

Patterson saw Media Days as an opportunity for his young quarterback to grow and grow quickly, an idea Robinson agreed with.

“It’s been great,” he said of the experience in Frisco. “Eye-opening. I never expected to be here at this point in time in my career.”

Austin said he saw Robinson grow as a vocal leader during spring practices, a trait that the coaches will certainly take into account when choosing their starting quarterback for the season opener against Southern.

While Robinson certainly seems to have the inside track on the starting job, there will be no shortage of competition in fall camp.

Patterson said this is the best quarterback room he’s ever coached, top to bottom. Rodgers is the highest-rated recruit in the school’s history and Collins impressed coaches with his strong arm and playmaking abilities during his time on the scout team last season and as a co-starter this spring.

But at the end of the day, it’s about what they do on Saturdays when given an opportunity that matter most.

“I don’t judge a quarterback’s practice or stats or anything else, I judge them on Saturdays,” Patterson said.