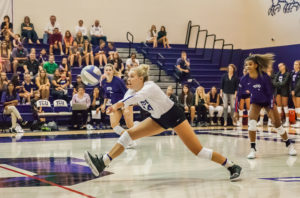 The TCU Volleyball team suffered their first loss of the season Friday, losing in straight sets to the Florida State Seminoles. The teams are playing in a tournament hosted by Colorado State.

The Horned Frogs low hitting percentage, a season-low .102, and the Seminoles’ 15 blocks proved to be the difference.

TCU’s 23 errors were also their second highest mark of the season, and 13 more than the Seminoles.

Freshman Èlan McCall continued to impress offensively, leading the team with 13 kills. It was her fifth straight double-digit kill match.

TCU will look to rebound in this weekend’s tournament when they take on Cincinnati tomorrow at 1:00 p.m.