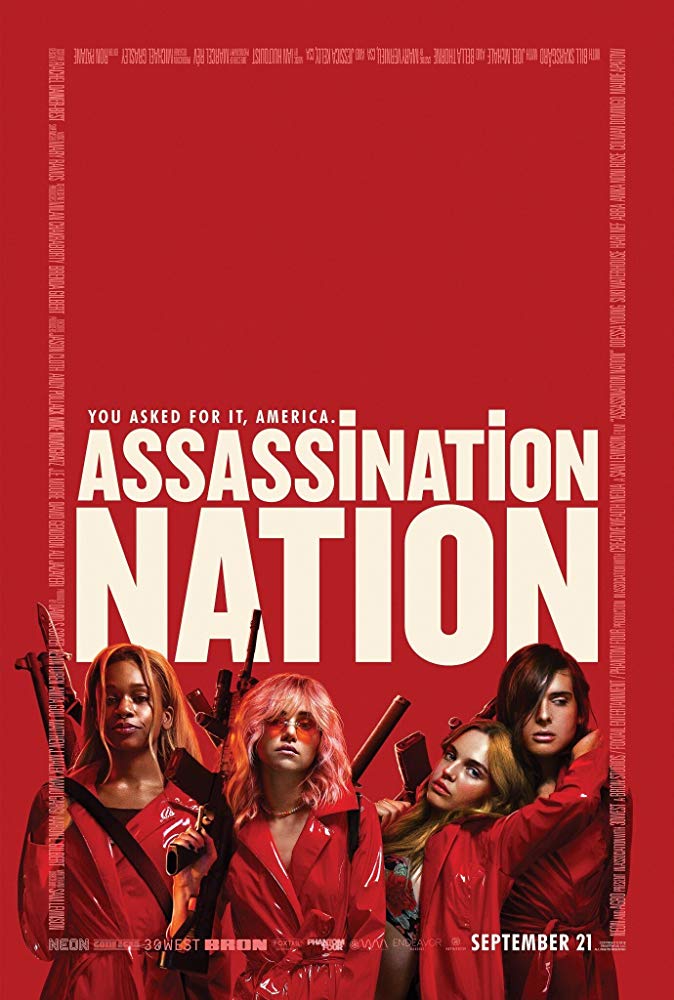 print
In a modern, violent interpretation of the Salem witch trials, “Assassination Nation” follows four high school girls as their community falls apart after an anonymous hacker begins to release all of the town’s digital history.

Internet search histories. Private videos. Texts and direct messages. All of it.

Everything the people of Salem have ever sent is made public and with it the seams of society start to split and tear.

First, just people in power get attacked, including the mayor and the principal of the high school; then starts the massive dump of half the town’s secrets. Increasingly desperate and hostile, normal citizens start to lash out at any new lead or rumor as they are continually terrorized by this digital sorcerer.

While the cops can barely comprehend what a hack is and how it happened, and the FBI refuses to intervene, most of the men in the town decide to hunt down the hacker. Their rage-fueled crusade through their own community causes the town to descend into complete chaos and violence with our four main characters caught in the rampage.

This is the first feature film for the writer-director Sam Levinson, and the inexperience occasionally shows through an otherwise captivating experience.

About every 20 to 25 minutes, a character would shift into center frame and begin to pontificate about society, privacy or relationships. While the content or overall message of each scene works thematically, all feel needlessly longer than they should.

What is odd about the clunkiness of those monologues is that throughout the rest of the film the story is tight, keeping you enthralled in Levinson’s social media apocalypse.

The hit or miss quality extends to Levinson’s other role as director.

Unfortunately, many of the characters are weak or don’t get the screen time to develop them more. However, there are some notable performances that stand out.

Among the four heroines, two rise above the others. The first is that of out main character Lilly (Odessa Young) and her best friend Bex (Hari Nef). Both of which, while only given slightly more dialogue and screen time than the other two, seem to have deeper understanding of their thoughts and their reactions.

What cannot be overlooked when discussing this film is the cinematography and the editing, which work in tandem to provide some of the most appealing aspects of the film.

Marcell Rév creates impressive visuals like filling the fame with one color. Striking red, rich blues, pink and green neon or stale white set the emotion tone of each scene.

While only a portion of the film pushes the use of color that far, the rest of the film time and time again has bold camera movements that both impress and provide most of the tension and drama in the film.

Some of that tension also comes from the editing, which simultaneously doesn’t shy away from showing brutal and deeply unsettling scenes of violence and near sexual assault. And yet, Ron Patane somehow cuts away right before we can’t take it anymore and lets the audience come up to breathe before pushing the viewer back under.

While the weak characters and graphic nature of the film does limit the overall audience, the creativity and boldness kept me engaged throughout the runtime. The film does slightly resemble the recent “Purge” franchise with their social themes, but “Assassination Nation” has starts a all out war on misogyny with indie, B-movie streak and a ton of violence.