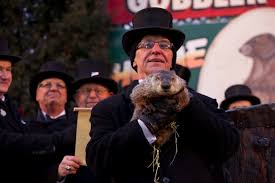 Happy Feb. 2, also known as Groundhog Day! The groundhog, Punxsutawney Phil, has been hibernating all winter and is ready to come out and determine if there will be six more weeks of winter or if spring is upon us.

Here are some fun facts about the holiday to get you ready for Groundhog Day:

To watch Punxsutawney Phil make his prediction, click here. It will begin at 6 a.m. EST.