Michelle Nguyen, the first Asian-American woman to be awarded the title, is the co-founder of The Justice Coalition, a student-run organization that is working towards a movement for social justice on TCU’s campus, according to their Twitter bio.

“Speaking with students of color, and students in marginalized populations, there is a lot of injustice that happens in this country,” Nguyen said. “I have grown an overwhelming passion for fighting against it.”

Hope Bentley, co-leader of The Justice Coalition, has worked closely with Nguyen through the organization.

“She is a compassionate and empathetic leader,” Bentley said. “She is very good at connecting with people and making sure they feel connected to the cause. She is working really hard right now on helping the faculty pass a new requirement for a diversity class in the core curriculum.”

Nguyen is also a part of the Gender Resource Office Programming Board, which helps advocate for the LGBTQIA+ community on campus.

“She embodies the strength, the voice, the quality and the diversity of what TCU should be,” Lee said. “She’s very vocal about it and that’s what makes it so great.”

Nguyen is continuing to work to make a difference at TCU during her time left here.

“I don’t know what exactly Michelle will end up doing, but I know wherever she is she will be fighting for equality and justice and the world,” Bentley said. 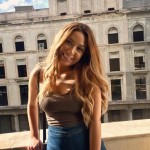 Zoë is a junior News and Media Studies Major with a minor in Sociology from Mansfield, Texas. She enjoys traveling, yoga, and eating Jimmy Johns.