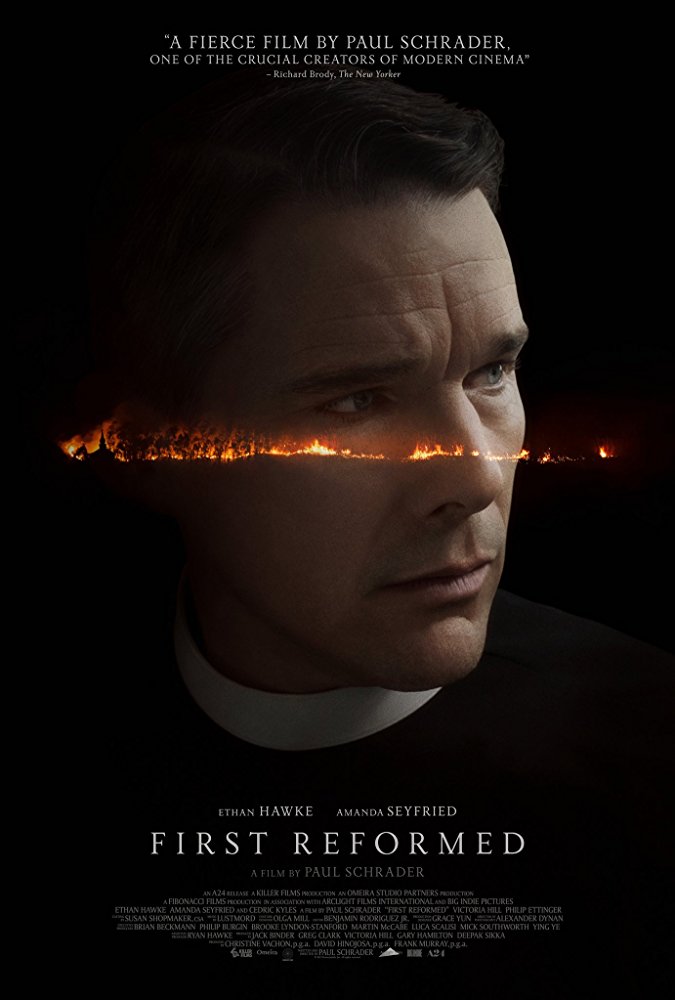 An expertly and meticulously crafted film, “First Reformed” lingers in the audience’s mind with honest and powerful questions about faith, love, sacrifice and loss.

Following Reverend Toller’s (Ethan Hawke) one year experiment of writing all of this thoughts in a journal instead of praying, Toller’s faith is challenged by a troubled couple (Amanda Seyfried and Philip Ettinger), fellow Reverend Jeffers (Cedric the Entertainer) and a local business magnate over the reconsecration of Toller’s 250-year-old church First Reformed.

Right from the first scene, visually one can see why the current indie patron saint A24 partnered with the film’s writer and director Paul Schrader. From the 4:3 aspect ratio that was similarly done in “A Ghost Story” and “Mid 90s” to the bleak grays, blues greens that evoke memories of “Swiss Army Man” or “The Lobster.”

Like many A24 films, like the ones previously mentioned, “First Reformed” has its own stark visual style feeling like a combination of Wes Anderson’s highly symmetrical framing and the esoteric and subjective framing of someone like Terrence Malick.

While Anderson’s framing seems to come more from the whimsy and fairytales, Schrader creates compositions that seem rigid or puritanical in some manner that are more reminiscent of an oil painting.

In addition to the starkness and minimalist set design in the film, the editing forces the audience to hold on to certain moments for half a beat longer than a typical film would, but it’s those moments that bring in this theme of emptiness that permeates the entire film.

Schrader’s confidence in his visually and contextually interwoven story not only shows in his decision to hold on to but also in some of the decisions of where to place the camera.

In several scenes sprinkled throughout the film, Schrader has shots that would seem to break basic logic, like holding on a shot of Seyfried’s character while she is turned away from the camera crying.

In those moments, along with one scene in particular that occur roughly two-thirds into the film, Schrader skillfully keeps the viewer almost that should take one out of this grounded film.

“First Reformed” is nominated for Best Original Screenplay at this Sunday’s Academy Awards.

While the similarities to work on “Taxi Driver” can clearly be seen throughout the film, “First Reformed” poses foundational questions to the audience that is sure to divide viewers. The clear technical vision from the script to each frame both shows a clear understanding of cinematic language as well as an inclination to push and experiment. Even though Schrader creates and keeps a tense and captivating tone, the lack of a clear answer or solution to issues that the film raises could easily upset audiences as credits roll. But like the rest of the film, providing an answer for the questions Toller confronts would cheapen the film and cause it to lose its .