Insightful, exciting, and foundational were all words used to describe TCU swimming and diving’s season so far as the team prepares for the postseason.

In the beginning, the Horned Frogs weren’t expecting an undefeated season as head coach James Winchester took over for his first season, but they were expecting to reset the culture within the program.

The motivation that each Frog gives to each other them in the pool.

The Frogs dropped several close matches this season, including two meets against North Texas (women’s only), but they have used the experiences from each to help them grow.

First-year student Megan Morris commended her team members on the energy that they have in and out of the pool.

“James has a vision and is very set on that vision,” Morris said.

For some of the athletes, Winchester is the only coach they’ve had at TCU, but others are on their third coach in the last three years.

Senior Maddie Ibrahim said that it was hard to not get discouraged as the revolving door of coaches occurred, but she believes that TCU hired a great asset to the program.

“We finally have a coaching staff that we look up to and can trust,” Ibrahim said. “Everyone has jumped in and really put all efforts out there to see how the conference meet goes.”

Winchester challenged the seniors to leave a legacy for the younger Frogs as well as future recruits. There are short-term expectations within the program, but the staff is focused on the big picture and the potential that TCU’s program has in the long run.

The seniors took what the coaching staff said and ran with it.

Freshman Michael Chwaluk said that the seniors have made a huge impact on his first season.

“They want us to become the leaders of the team,” Chwaluk said. “They are constantly cheering us on and picking us up whenever we need it.”

The Frogs hope that the bond that they’ve created will help propel them to success this postseason.

“The seniors just wanted to set a high standard for the freshmen, and I believe we have,” Ibrahim said.

As the Big 12 championships near, the team members are excited to see how far their hard work and determination can carry them.

“It’ll be great to see the body of work and what we can do in the pool and on the boards in the next couple of weeks,” Winchester said.

The postseason journey will begin at the championships on Feb. 27-March 2 in Austin. 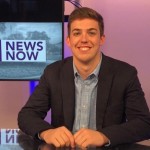 Hunter Ince is a senior sports broadcasting major with a journalism minor from Whitney, Texas. After graduation, he plans to get his masters in sports management to become a sports marketer.