When Heath Einstein was interviewed for his current position, he was asked what he would want TCU to do to diversify the campus, Associate Provost Mike Scott recalls. His response: they could start by hiring a Jew as dean of admission.

Einstein’s own lived experience perfectly aligned with TCU’s search for diversity, equity and inclusion in Vision in Action: Lead On.

He is a “champion for social justice,” said Scott. “That is so apparent.”

Einstein now uses his sense for inclusion to guide his decision-making as dean.

“Perhaps even my biggest goal is to help the university achieve its mission to create a space that is as inclusive as possible to as many people as possible,” Einstein said. “I don’t ever want someone to come here for a visit, much less enroll here, and feel like the experience is meant for somebody else.”

His involvement in the organization, Admissions Community Cultivating Equity and Peace Today (ACCEPT), has helped Einstein better understand the experiences of marginalized students who navigate the college process.

“It’s an online group trying to build a community of adults who are going to be prepared to help these students through difficult times, whether it’s a result of systemic racism that they may encounter or a particular instance of individual or overt racism,” he said.

It was through this involvement that he got a “Black Lives Matter” bracelet, which is often seen on his wrist.

From a young age, Einstein never strayed from people of diverse backgrounds. At his high school in Orange County, California, he wasn’t the type to stick with a single crowd.

“A lot of high school students I come in contact with sort of struggle with that,” Einstein said. “They feel pigeon-holed or that they’re sort of typecast. But I always felt like I didn’t really have a label. I was just sort of friends with the people I liked.”

His ambitious pursuit of new experiences pushed him to go far for college: The George Washington University in D.C., where he studied political science.

It was after graduating that he stumbled into a job as an entry-level admissions counselor at his alma mater.

“My thought, like many people who start in our line of work, was ‘I’ll do this for a couple years and then see where it takes me and probably will use it as a stepping stone for something else,’” Einstein said. “But I just stayed.”

Part of the appeal was that Einstein could talk to high school students and college students regularly.

“I just get a kick out of having a conversation with a 17-year-old about what their life dreams are,” Einstein said.

Einstein wanted to help even more teenagers on the other side after almost three years at GW admissions.

It was among the 200 college visits he did as a high school college counselor that he first saw TCU.

“It was clear that this place was different,” he said. “I remember driving into the campus and seeing purple street signs and seeing students walk around who looked really happy.”

When he decided to go back into admissions almost eight years later, TCU became his new home.

“There’s a level of commitment to community here that is different,” he said. “Now not everyone feels it, and I recognize that. But I felt it when I got here, and I haven’t been let down at any point since.”

Einstein being able to maintain relationships with TCU students is one of his favorite parts of the job.

After she wanted to get involved with admissions as a campus tour guide, senior Lexee Leach set up her first meeting with Einstein, but it turned into many more.

“He took the time to meet with me several times, check in on my academic progress and make sure I was happy,” said Leach.

At my first college visit, Monday at TCU 2014, the Provost asked us at lunch, “Who is going to be our first female president in this room?” I raised my hand and he gave me an amethyst that I still have. Tonight, he introduced me to give the invocation for the TCU scholarship dinner. I’m thanking God every day that he brought me to the absolute perfect university for me, and that TCU has given me so many opportunities these past 4 years!🐸💜

Einstein gave Leach a gold horned frog pin that she said she now wears to every campus tour and event.

Leach credits Einstein to having made a positive impact on her TCU career, saying she’s never met a person that cares more about the people on campus.

“He has impacted my experience by being an incredible mentor to me when that is definitely not his job,” she said.

His day job entails running the admissions staff, making important decisions about the future student body and meeting with other administration.

“Everyday is a little different,” Einstein said. But there still is a rhythm to a year in admissions. 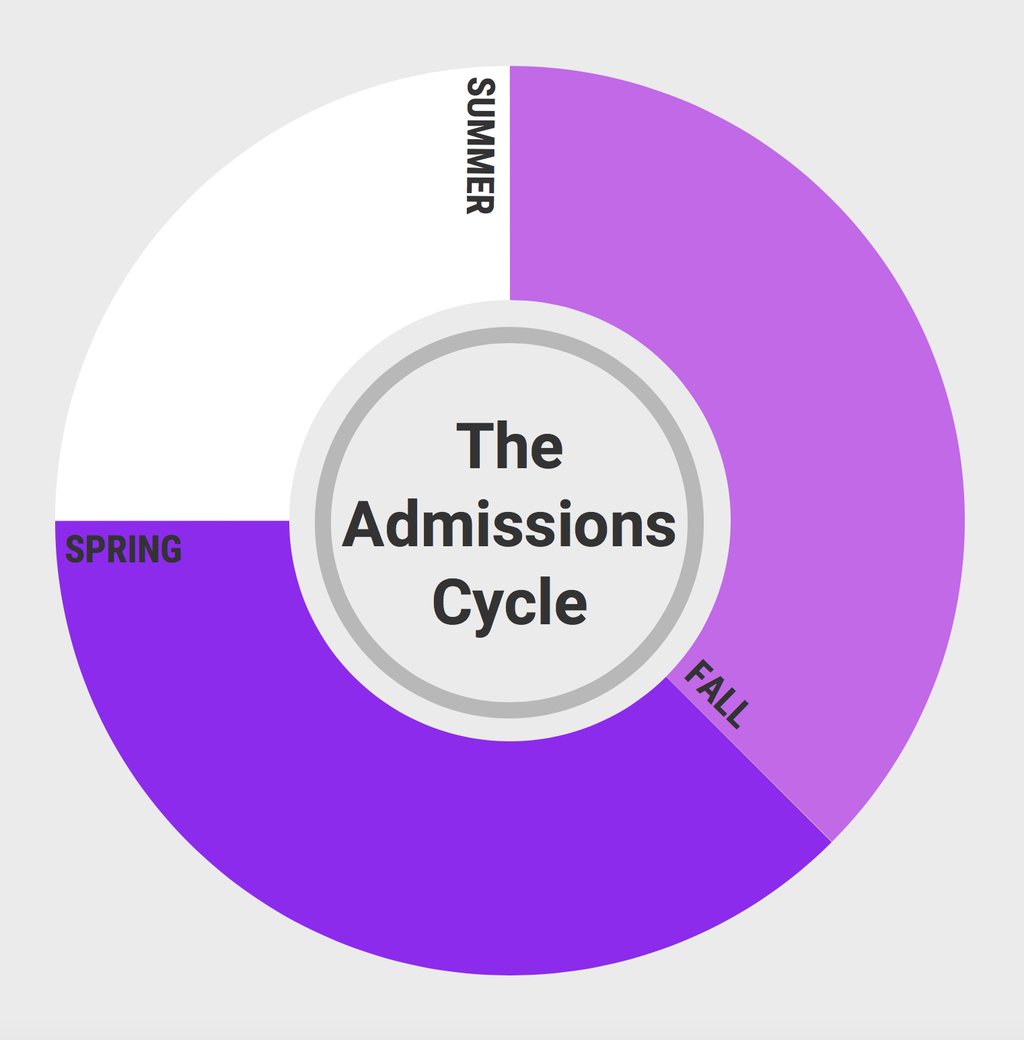 “He has probably the most difficult job on the campus,” said Scott. “The entire operational ability of the university hinges upon us bringing in a certain number of students every year.”

But Scott recognizes that it isn’t just about tuition dollars. The university wants students with high academic profiles, active involvement and diverse experiences.

Einstein said he feels fortunate that they don’t consider a family’s ability to pay when making an admissions decision.

“While I know at a very high level we need to make the numbers work in terms of dollars and cents, what we’re looking for is students who bring diverse perspectives to campus.” Einstein said. “And we know that students who don’t have the same financial means that other students have have lived a different experience.”

Bringing students from those different backgrounds will be more valuable for the students and the university as a whole, Einstein said.

“There are weeks we work long hours with not much reward, but when we see the future of TCU and the students on campus, it is all worth it,” she said.

But Einstein said it’s almost impossible to measure the success of a class after the deposit deadline.

“People will come up to me often as the admissions cycle is ending and say ‘Boy you guys did a great job. We had a great year,’ or ‘We missed the mark a little bit. Better luck next time,’” Einstein said. “I’m not going to know with any class of students we bring in how successful it is until four years later when we see those students graduate.”

Einstein helps his team to stay on track despite the delayed gratification, Castro said.

“He is committed to the University’s strategic goals and consistently presents the lenses of increased profile and inclusiveness in our efforts to bring in the class,” Castro said.

The sticky notes surrounding his desk are a more accurate gauge of how Einstein measures his successes.

“Sometimes they’ll be pieces of paper all over the place, and if I can just crumple them up and throw them away that’s like a big win for me,” he said.

“Not about Heath Einstein at the end of the day”

Einstein said his biggest win is raising his three children.

“When I get home that’s my family time,” he said. “I’m not spending all day with my children so the time that I do have I really value.”

It wasn’t always the case that Einstein learned to have the right balance.

“It wasn’t really until I got into a position of leadership when I started preaching having work life balance that I looked inward and started to think about the imbalance in my life,” he said. “I’ve learned to just stop.”

But during the work day, Einstein said he wants to leave TCU a better place than he found it.