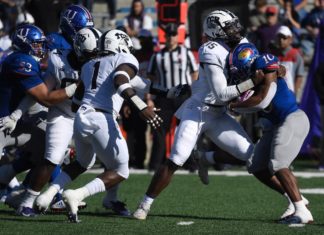 TCU football, a team familiar with beating Kansas, has learned to not take the team lightly after falling to the Jayhawks for their first time as members of the Big 12 last year.

“We haven’t really talked about it specifically,” cornerback Julius Lewis said about last year’s loss to Kansas. “We know now that you can’t take anyone lightly.”

With that in the back of their minds and coming off of their first loss of the season last week against SMU, the team is eager to take care of business Saturday at Amon G. Carter Stadium.

After being fired by LSU in 2016, Les Miles, who won the BCS National Championship in 2007, took over at the helm for Kansas this season and has Jayhawk fans turning heads for the first time in a while.

Standing at 2-2, their season has included a dominating win over Boston College 48-24, their first win over a Power 5 school in almost 11 years. The Jayhawks put up 567 yards of total offense against the Eagles.

On the other hand, they have shown lows like falling 12-7 to Coastal Carolina.

The Jayhawks’ offense is led by their rushing attack, with two rushers averaging 96 yards or more per game. Their 186.8 rushing yards per game account for over 46% of their total offense.

Senior Khalil Herbert leads the way for Kansas with 384 rushing yards and two touchdowns on the year.

Right behind Herbert is Preseason All-Big 12 First Team running back Pooka Williams, Jr. After serving a one-game suspension, the sophomore has rushed for 296 yards and a score so far this season.

“Their whole offense [is good],” Patterson said.  “Les Miles is a good guy and a good coach. He’s a good motivator.”

As a team, TCU has given up an average of 81 rushing yards per game.  Linebacker Garrett Wallow and his 14.0 tackles per game (No. 3 nationally) have been pivotal in this success for TCU.

Running back Darius Anderson leads TCU with 368 yards and four touchdowns already this season. The senior has rushed for 150-plus yards in two-straight games after totaling 179 yards and 161 yards against Purdue and SMU, respectively.

Both teams are also playing behind signal callers who are full-time starters for the first time. For the Jayhawks, senior Carter Stanley had started a handful of games in his first three years at Kansas. Now the official starter, he has completed 72% of his passes for 861 yards, eight touchdowns and four interceptions.

With senior Julius Lewis questionable again for Saturday, the Frogs could see cornerback Kee Stewart start opposite of cornerback Jeff Gladney for the fourth-straight game.

For TCU, first-year quarterback Max Duggan will most likely start for the second-straight contest. However, Patterson emphasized that he had not found a permanent starting quarterback.

While seeing Alex Delton on the field is a possibility for the Frogs, Patterson even mentioned that junior Michael Collins is fully healthy and could play against Kansas.

Kickoff against the Jayhawks is scheduled for 11 a.m. Saturday.

Colin Post is a journalism major from Houston, Texas. Hoping to find a career in sports writing post-grad, Colin has covered TCU Athletics for TCU360 for four years. Gary Patterson even blocks him on Twitter (which you can find at @colinp_3). Colin enjoys watching and discussing sports, listening to music, and going to Starbucks.