Tensions were high at Garvey Rosenthal Soccer Stadium on Sunday as a last-minute goal forced two overtime periods in a 2-2 draw against No. 23 Kansas.

A tie was reached with merely 13 seconds remaining in regulation and neither team scored in overtime.

The Frogs started slowly in the first half, which led to a Kansas goal in the 20th minute.

“The game didn’t go according to plan the first half,” head coach Eric Bell said. “We had to work a little harder in the second half. I’m happy with how the team responded, it showed character and grit about our group.”

Tara Smith led the Frogs in the second half, tying the game with a rebound score inside the box.

The goal was the second of the season for Smith and the fifth of her career.

TCU ruled the majority of the second half with 16 shots compared to Kansas’ nine. However, a penalty kick for the Jayhawks in the 86th minute pushed them in front.

Four minutes later, Messiah Bright hit an equalizer for TCU, a bullet header off a cross by Grace Collins.

“We pushed another number higher, but other than that it was just having to work a little harder and smarter,” Bell said. “I thought the level of intensity increased in the second half. We made it harder for them to get out of their end.”

Bell said that the Frogs would need to start faster in the future to win tight matches such as these.

TCU will finish their regular season in West Virginia.  The game is scheduled for 6 p.m. Thursday and will be televised on FS1. 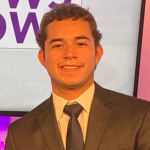