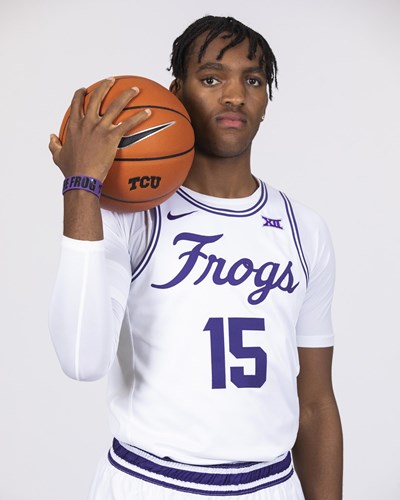 Although TCU’s basketball season was cut short due to the uncertainty of the COVID-19 pandemic, the next set of Horned Frogs to hit the hardwood next season are sure to bring some noise to Schollmaier Arena.

While senior guard Desmond Bane, who ranks third all-time at TCU with 1,768 points, fourth with 652 field goals and first with 247 3-pointers made, is headed for the NBA, head coach Jamie Dixon’s 2020 recruiting class looks more than capable to pick up the slack.

The class includes a trio of stars who each made headlines in their senior seasons.

Perhaps the most well-known of the group, Terren Frank helped lead Sierra Canyon High School (ranked second nationally) to the state playoffs before their season was cut short by the coronavirus.

Playing with high-class talents like five stars BJ Boston (Kentucky) and Amari Bailey (undecided), Frank made a name for himself by averaging 11 points and seven boards prior to the state playoffs.

The 6-foot-7 forward was named to the All-Gold Coast League First Team, as Sierra Canyon finished with a record of 30-4.

Like Frank, Mike Miles was also pursuing a state title when his season was cut short by the pandemic. Behind his 21 points, four assists and three steals per game, Miles led his team to a 39-1 record, leaving them as the top-ranked 5A team in the state.

Ranked No. 7 in the state of Texas, the guard was named All-Area Boys Basketball Player of the Year in March by the Dallas Morning News.

Rounding out the 2020 roster is Eddie Lampkin, a 6-foot-10 center who made history in his time at Morton Ranch High School.

Behind 11.6 points and 10.9 rebounds per game as a senior, Lampkin led Morton Ranch to its first-ever regional tournament. Although the Mavericks fell in the 6A regional semifinals, their 30-straight district game wins with Lampkin is believed to be the top streak in Katy ISD basketball, according to Katy ISD.

Lampkin selected TCU over multiple other Texas schools, including Baylor and Texas A&M.