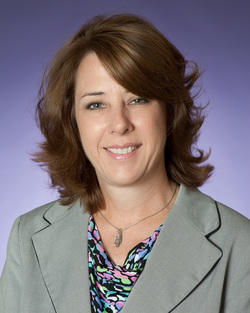 Jean Mrasek has been working to promote Panhellenic excellence since pledging Chi Omega at the University of Tulsa in 1979.

Her dedication to the Panhellenic community as paid off.

Mrasek, the director of development for the College of Education at TCU, has been selected to serve as the National chairman for the 2013-2015 term.

“We are so grateful to have Jean Mrasek as part of our university community — and now as a much bigger part of the women’s sorority movement,” said Chancellor Victor Boschini in a press release. “She will undoubtedly do her usual outstanding job in this new leadership role.”

Mrasek is the fourth member of Chi Omega to serve as the NPC chairman. Mrasek explained that a new chairman is selected every two years from one of the 26 NPC organizations. Mrasek follows incredible women, including the founder of Chi Omega, she said.

“They’re all incredible leaders, accomplished women and community servants,” said Mrasek of the former NPC leaders. “They are incredible role models for each of us and it is truly an honor to follow these women.”

Her goal as chairman is to represent all 26 organizations and spread the power of the Panhellenic community. Mrasek said sorority advancement is achieved when all Panhellenic organizations work together. Her vision is to move forward in a deliberate and unified manner.

“We have this incredible experience where there is an understanding that you may wear a different badge than I wear, but we both believe in the greater good that the sorority experience offers,” Mrasek said.

Her enthusiasm and dedication for the Panhellenic community provided her with the opportunity to serve as the Chi Omega national president for four years. Prior to that position, she served as the Chi Omega national secretary. Her time on the National Panhellenic Delegation confirmed her deep commitment to mentor, encourage and empower women, she said.

In regards to the TCU Panhellenic community, Mrasek said she believes students find the Greek experience enriches their college experience. She said TCU is fortunate to have positive support for the Greek community.

“Historically, TCU has had a long-standing positive tie with our national sororities,” he said in the press release. “We are thrilled to be building upon that relationship with Chairman Mrasek.”