Rachel Jacobson, a first-year food management major, was recently hired by TCU’s Sodexo staff to revamp the look and taste of the items offered in the pastry case at Union Grounds.

Jacobson said that Sodexo provides her with ingredients and she is allowed to make a menu consisted of whatever she wants each day.

She makes her baked goods from recipes that have been passed down to her, recipes she’s modified or recipes she’s created herself.

She said her baking is inspired by trends she sees on campus. For instance, Jacobson said she noticed a trend with pumpkin items like in Starbucks, which inspired her to transform a pumpkin bread recipe into a pumpkin muffin recipe which has become one of her top sellers.

Jacobson works four hour shifts, four to five days a week and on her days off she tries to make extra baked goods.

“This stuff goes really fast,” she said, “It’s hard for me to keep up with it.”

She explained that her day from 8 a.m. to 5 p.m. is booked between class and work, initially she had trouble managing social life, sleep, studies and exercise.

“It was hard at first, I struggled with it a lot,” she said.

But after a couple weeks, she said balancing her schedule became more manageable.

Since she has been working as the student baker for Union Grounds, she said many changes have taken place, especially in the marketing of her products. She developed her own logo and created a new display for her portion of the case in Union Grounds to differentiate her products from the rest.

She designed her logo so that her initials make up a bottom of cupcake and a swirl design makes up the icing which creates the image of a cupcake. The brand name for her products is “REJ” which stands for her initials, Rachel Elizabeth Jacobson. 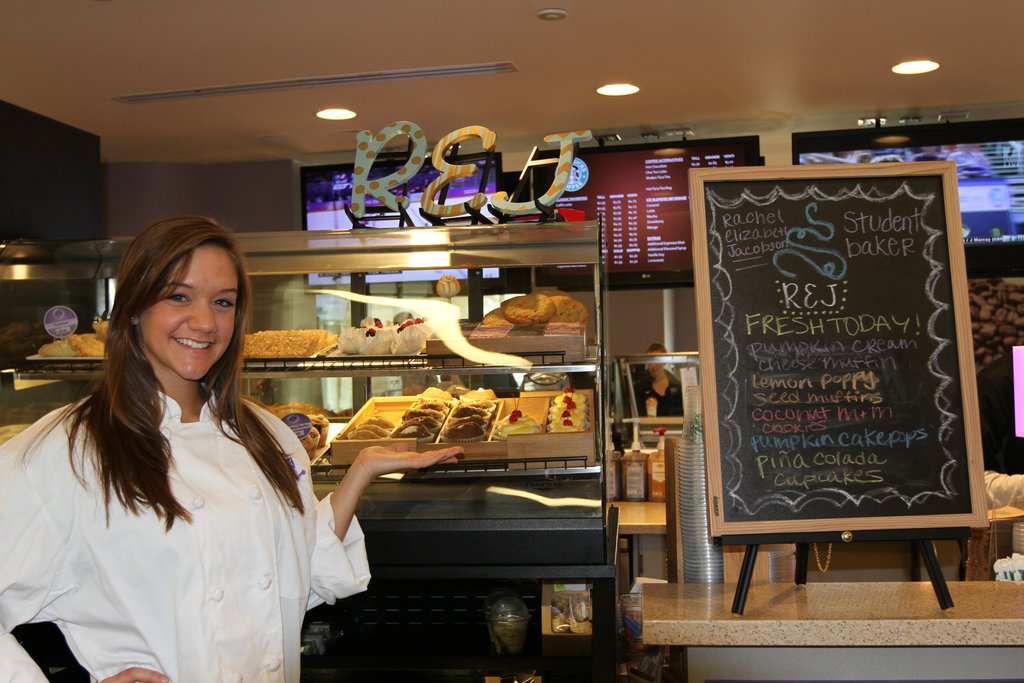 REJ’s baked goods have a more of a visual appeal, she said. She wants to intrigue costumers to initially look at the products and then decide if they like the flavor.

Eventually, Jacobson said she wants to open up her own bakery. She said this experience in the kitchen is helping her to reach that goal.

“A lot of the older chefs have taken me under their wing,” said Jacobsen.

Through this experience, she said she is learning about the marketing and business side of the industry by understanding how well products are selling and many pastries need to be made per day and the pricing of items, she said.

Michael Dahl, the director of operations for Sodexo, said they wanted to hire Jacobson to provide her with an opportunity to learn.

He said he wants Jacobson to develop her skills and career as far as she desires while working as the baker for Union Grounds.

Dahl said he was encouraged to give Jacobson the Union Ground case to manage when he realized it needed some attention.

“We are pumped that she wanted to work for us,” said Dahl.

Jacobson is not the first student to be hired by Sodexo, Dahl said, but she is the first baker to be hired and the first to be working so deep in the kitchen. Currently, Jacobson is one of two TCU students on Sodexo’s payroll.

He said aside from the visual change brought to Union Grounds by REJ, he also noticed that back in the kitchen Jacobson is “bringing excitement to people who have done this for 30 years.”

She is learning from the staff and also teaching the staff simultaneously, he said.

Dahl said Jacobson has been baking for Union Grounds for six weeks now and her products have been a hit.

She said that Union Grounds still carries their standard pastries, but she notices that the new pastries are sold faster.

Gonzalez said business is a lot better with REJ products. She said that Jacobson is coming to restock her items every one to two hours. She said before they would restock the pastry case every few hours.

Gonzalez said she even sees students come back for more, especially for the pumpkin cream cheese muffins.

“It was delicious and I would definitely buy it again,” she said.

Lebar said, “I like it because she is creative and it’s a student.”

She said she thinks REJ products are a little tastier, more unique and individualized than the standard pastries at Union Grounds.

Freshman political science major Bryce Baca had not tried a Union Grounds pastry before, but he recently tried one of REJ’s items.

“I really liked it,” he said. “It is really cool that a student had opportunity to make those.”

She said she did not know a TCU student made the REJ products, but she recognized the different decorations and display for the items and was curious as to what was different about them.

Leota thought the cookie had more of a homemade feel to it.

Gonzalez said costumers are excited about the REJ products.

“Students even take their picture with her [Jacobson],” she said.

Jacobson said she also constantly receives selfies with people eating her baked goods throughout the day.

“It’s almost like a dream still. I honestly can’t believe its all happening. It’s all happened so fast,” Jacobson said.