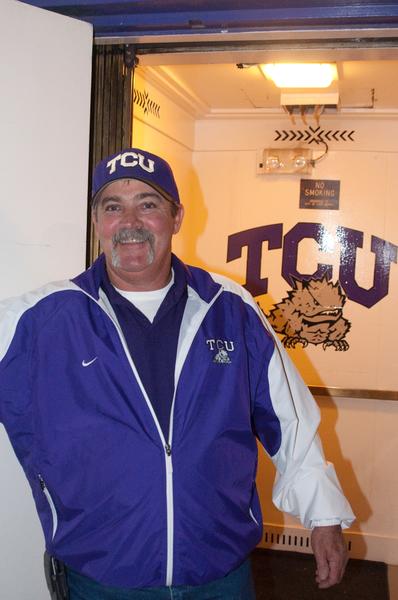 Amon G. Carter Stadium has been standing for 80 years and in that time, seats have been refinished and lights have been added. But the same elevator has taken fans and media to the upper deck for 54 years.

A $30,000 hand-operated elevator was installed in 1956 as part of the upper deck addition, which also included the addition of the two-story press box. The same year the elevator was installed, former TCU president M.E. Sadler was trapped between floors due to a mechanical difficulty, according to a Skiff article published in 1956. After regaining power, the elevator operator dropped Sadler off at the top of the upper deck, and Sadler had to walk back down to ground level.

TCU alumnus Butch Clark went to his first football game at Amon G. Carter Stadium in 1950 before the upper deck was added. Later in college he rode the elevator when it was first built when he worked as a play-by-play announcer for KTCU, the school’s radio station. Clark said there was a rumor that the elevator came out of an old steamboat.

One of the current elevator operators, Don Onebaugh, said that he also heard the elevator was from a steamboat, but no confirmation was found about the elevator’s past.

“I was told from an older gentleman that this was actually a used cab when they got it,” Onebaugh said.

The elevator that takes fans, journalists and photographers to the press box has not changed over the years, and is still operated with a hand crank. Clyde Ridge has operated the elevator for the past 14 years and said the elevator is among the oldest in Fort Worth. When fans need to be picked up they press a buzzer that alerts the elevator operator.

Ridge said he was not sure how he will be involved at football games after the west stands are renovated because the press box will be at a lower level, so the need for a press-heavy elevator may be eliminated.

“We’ve heard that we still might be involved with the elevator as far as…still being the face of the elevator, but we still haven’t been told for sure,” Ridge said.

Onebaugh has operated the elevator for the past 10 years and was also not sure how the renovation is going to affect his job. Onebaugh said the new elevators may require someone to run them, but he has not heard about the logistics of the new elevator.

Whether the elevator came from a steamboat prior to its time at Amon G. Carter Stadium or not, for the past 54 years the elevator has transported people with one common goal: to watch Horned Frog football.