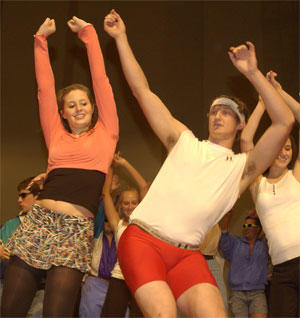 The annual group talent show, Frog Follies, hosted by Programming Council, took place Thursday night in Ed Landreth Hall Auditorium as part of the festivities for Homecoming 2005. Past events have included a ’50s Movie Night and a Decorate the Dorms contest.

The event filled up the auditorium with supporters for the more than 25 organizations taking part.

Although the show started over 15 minutes late, the members of the predominately female audience cheered loudly for their respective groups.

Organizations did skits illustrating their school spirit and the school’s history, including 50 years of Greek life.

Kappa Kappa Gamma and Pi Kappa Phi started the night off with a retro skit. The TCU Showgirls ended the evening along with an introduction of the 2005 Homecoming Court.

Ashley Bachmayer, a freshman premajor and member of Programming Council, said Frog Follies was a great tradition for TCU to have.

“It gets the Greek organizations involved in Homecoming. And Homecoming is an alumni event, so it helps tie it all together,” Bachmayer said. .

Katie Mangum, Kappa Alpha Theta president and Miss TCU candidate, participated in Frog Follies her freshman and sophomore year and said it was one of her favorite times at TCU.

Mangum, a senior fashion merchandising major, said Frog Follies is good because of its ability to bring groups and people together and have a fun time.