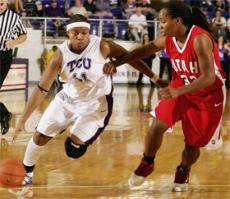 Imagine being on a team going into battle with your leader in points, assists and rebounds absent.That is the reality for the women’s basketball team, as junior guard Natasha Lacy missed the teams’ NCAA tournament first-round victory over Texas A&M and will again be absent tonight against No. 3 Rutgers in Trenton, N.J.

Team officials would not comment further on the matter other than comments made to the Fort Worth Star-Telegram.

Although news of her not accompanying the team for its first-round tournament game was just made available this past weekend, she has not practiced with the team since its loss in the conference tournament to BYU on March 9.

Team officials say no comments were made regarding the matter because nothing was set in stone as to her availability for the tournament. Teammates and coaches were not aware she would not be accompanying them until Friday, the day the team left for Trenton.

Head coach Jeff Mittie dismissed the idea of team violations or legal issues and told the Star-Telegram it was personal matters that Lacy had to deal with. Team officials did say she is still a part of the team.

Mittie told the Star-Telegram that this was a situation that needed immediate attention.

“We will evaluate that next week,” Mittie told the Star-Telegram. “That will be something that we will have to get back and see where we are at.”

Sophomore guard Adrianne Ross said the team has no choice but to adapt and come ready to play. She said the team has the same mentality as Lacy does as far as getting the ball up the court and that a lot of different players have the ability to play different positions.

One player who stepped up in Lacy’s absence against A&M is close friend and sophomore guard Moneka Knight. She scored a career high 14 points and had a team high 6 assists.

Mittie told the Star-Telegram the team must continue to step up and make plays in Lacy’s absence. He said this is the opportunity for somebody else to come in and make plays.

Tonight’s game starts at 8:30 and will be aired on ESPN2.