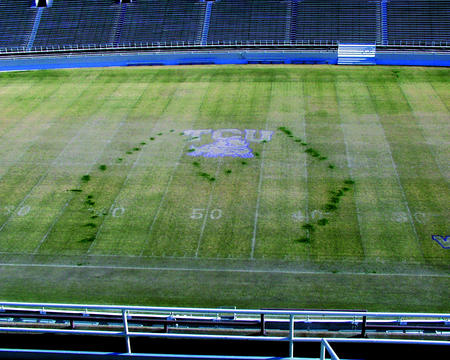 Pranks between the Iron Skillet rivals go way back.

In 2007, SMU fans snuck onto the football field at the Amon Carter Stadium and to TCU’s surprise, used weed killer to write “PONY” with a spray-painted up arrow. Not to be left behind, TCU fans dyed the water in a fountain on SMU’s campus purple and covered the doors of a band practice facility with stickers promoting the TCU band.

“I thought the weed killer was one of the greatest stunts,” Jenkins said. “I thought it was hilarious and wish we thought of it.”

However, some of the practical jokes between the universities have been borderline dangerous, an official said.

Don Mills, vice chancellor for student affairs, said that when TCU students slashed the tires of SMU students’ cars in 2007, retaliation could have resulted in violence.

“Not too many years ago, we had pretty serious physical violence happen between members of the SMU student body and the TCU student body,” Mills said, referring to two off-campus incidents in Dallas and Fort Worth in which TCU and SMU students fought each other. Mills said he could not remember the dates of the incidents.

Damage done to both campuses can be seen as harmless fun, but the situation can escalate into something serious, Mills said.

Even though he found the 2007 SMU stunt funny, Jenkins said he remembers a time when the campus focused on the football games and not the jokes.

“They were more concerned about the football game,” Jenkins said. “They were real football fans, and almost every student went to the games in those days.”

“I was happy to participate in the letter with Dr. Turner, in that I am all for any measure that will help people from both schools enjoy the rivalry and also act responsibly,” Boschini said.

White said she witnessed many rivalries similar to the one that exists between TCU and SMU while working at other universities. When fans destroy property or do something illegal, the friendly rivalry has gone too far, she said.

Hannah Wenzel, senior strategic communication major, said she thought pranks had an entertaining and fun factor to them. Wenzel said that as long as pranks do not cause harm, she does not consider them to be a serious problem.

Mills said he asked both band directors to remind their members of sportsmanlike conduct. He said he asked the student body presidents to be in communication and find ways to alleviate any unfriendly tension between the two schools.

“I expect them (TCU students) to cheer as loud as they can for their team, boo the refs when they think they’ve made a bad call, and after it’s over, to put their arms around their friends from the other school and enjoy each other’s company,” Mills said.

“I am a big supporter of rivalry and team competition and spirit,” Kobler said. “As long as pranks are kept smart, clever, and in good taste, I don’t have a problem with it.”

Open dialogue took place between both university presidents, said Kelsie Johnson, TCU’s student body president. Johnson said that pranks seemed like high school controversies that should not be happening at the university level.

2007 – “PONY” followed by an up arrow was written on the TCU field with weed killer.

2007 – Fountain water on SMU’s campus was dyed purple, cars were covered in shoe polish, tires were slashed and doors to the band practice facility were covered in bumper stickers promoting the TCU band.