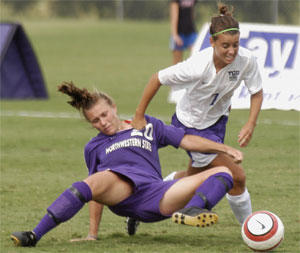 A determined TCU soccer team fell to Boston University 1-0, but rebounded with a 1-0, double-overtime win against Northwestern State as part of the Horned Frog Invitational at Garvey-Rosenthal Stadium over the weekend.After the Frogs’ loss, a frustrated head coach Dan Abdalla commented on the outcome of the game.

“We really should have won,” Abdalla said. “We have the talent, and we have the potential. All we need is someone who will step up and take charge of the team. If there is anything we lack, it is a leader.”

“We came out too timidly,” he said. “We picked it up in the second half; however, it was too late at that point.”

“We need to play hard from the start,” Thompson said. “We can’t win if we play to win for only one half.”

“This was so disappointing, that we couldn’t get a win,” Buchanan said. “We played very hard the second half, and came so close in the end. We had such a timid mentality at the start of the game, and we couldn’t overcome our opponent. However, we would rather have this issue now than in conference games or in the end of the season.”

The team evened its weekend and season record Sunday against Northwestern State.

After a scoreless regulation and overtime, the game went into a second overtime, where junior midfielder Karissa Hill set up senior defender and midfielder Moran Lavi with a pass. Lavi was then illegally hit, awarded a penalty kick, and scored a goal to end the game.

Abdalla said unlike in the tournament opener, the Frogs played a full game against Northwestern State.

“We have to credit this game to persistency,” he said. “We played hard from the first minute to the 90th minute. This was a great moral booster for the team.”

Abdalla said he is looking foward to upcoming games.

“We will be playing some great competition very soon,” Abdalla said. “We have to play from start to finish at the top of our game if we’re to compete with our opponents.”

The Frogs play Pepperdine at 4 p.m. Friday at home.