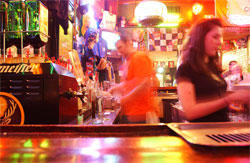 Beck said the main goal of the program is not to arrest patrons but instead to stop the over-serving of customers by bartenders. She added this will result in less drunk people leaving bars and, logically, less alcohol-related accidents.

Texas leads the nation in the number of alcohol-related traffic fatalities, according to an August 2005 TABC press release.

Beck said there may never be a way to determine whether the “sales-to-intoxicated-person-stings” have resulted in less alcohol-related citations over time because the variables make it difficult to prove causation.

Karen Smith, a lieutenant with the Tarrant County district of the TABC, said contrary to popular belief, the law allowing citations to be issued within bars is neither new nor an invasion of privacy.

“A bar is a public place,” Smith said. “So there is no expectation of privacy in a bar.”

The increased enforcement of the statewide laws allowing TABC officers to issue public intoxication citations inside bars has left bartenders and patrons speechless.

Managers at Snookie’s Bar & Grill, bartenders at The University Pub and customers at The Cellar all declined to comment on the recent TABC stings.

Snookie’s is located on Hulen Street. The University Pub and The Cellar are within walking distance of TCU campus.

Texas laws also allow officers to issue citations to bartenders who over-serve customers to the point of intoxication or continue to serve a drunk patron.

Rachael Bigham, a bartender at Snookie’s, said she knows two bartenders who have been issued citations for over-serving within the last month. She said those bartenders worked at The Library and The Pourhouse in downtown Fort Worth.

TABC officers have been trained to spot the signs of an intoxicated customer, which Beck said included “stumbling, being inappropriately loud, crying and not being able to stand without leaning on something.”

Once the TABC officers conduct a field sobriety test or a portable breath test, the officers decide whether to issue a fine and take the individual to jail.

Smith said new laws were implemented in October 2005, allowing the TABC to hire and train 60 additional officers, including four for Fort Worth.

People “are making bad choices, so we have to stop folks from driving,” Rolls said.

Bigham said she thought it was all right for officers to issue citations to anyone who poses a threat to themselves or to other people.

“But if they’re sitting there minding their own business and having a drink casually, I don’t see any problem with that,” Bigham said.