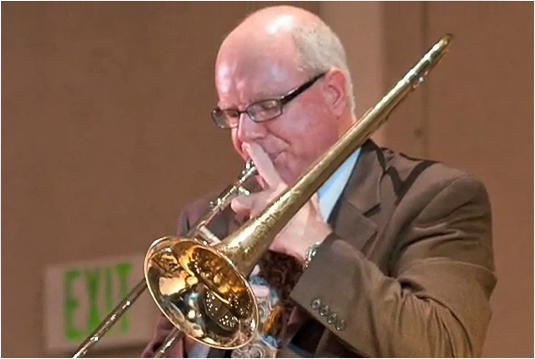 Iles, who works as a musician and has performed with such names and acts as Joe Cocker, Hans Zimmer and Prince, said that when he plays at festivals like these he often makes some new friends while bumping into some old ones.

“It has a real familial feel to the whole thing, so it’s really more of a celebration of the music than anything,” he said.

Iles said he enjoys participating in school festivals because he gets to interact with so many different kinds of people.

“Festivals like this with a lot of school groups, you get to hear people who are in various stages of learning about the music,” he said. “It’s really exciting to get to hear people starting to play and discover this music for themselves.”

Wilson said convincing Iles to come to TCU for the first time was not difficult. All he had to do, he said, was ask.

“We’ve performed with over 50 international jazz artists,” Wilson said. “They’re just like you and I. You pick up the phone, and if they’re available, and the price is right, they’ll do it.”

Iles’ main source of employment comes from recording for television and film, like the upcoming “Pirates” movie, he said. He considers himself to be a studio and freelance musician, but he would not necessarily characterize himself as a jazz musician, since he does not devote his life to it, he said.

For him, an audience teeming with teenagers means that they will be more receptive to his music.

“It’s a great audience because the kids are really excited about the music and learning about it, and they’re the ones that are going to keep it alive and share it with other people,” he said.

Mostly, Iles said he just hopes everybody in the audience will be tapping their toes.

Nineteen middle and high school jazz bands will perform Saturday while being evaluated by a panel of six professional musicians from 9 a.m. to 5 p.m., Wilson said. Awards will be handed out to the top performing school bands at 7:30 p.m..

Wilson said his big band will perform with Iles on Saturday night, and Joey Carter’s big band will also take the stage. He said he started the TCU Jazz Festival his second year here, and plans to retire this semester after 35 years at TCU.

“It’s going to be really bittersweet for me,” he said.

Wilson is a native of Fort Worth and earned his biomedical engineering and master of music degrees from TCU, completing his composition studies at the University of North Texas.

“I’m sad to leave all the students,” Wilson said. “I’ve been doing this for a lot of years, and I’ll miss them the most.”

Joe Eckert, assistant professor of saxophone, will be taking over the band next year, he said.

The lineup for the weekend:

$10 admission at the door

$10 admission at the door