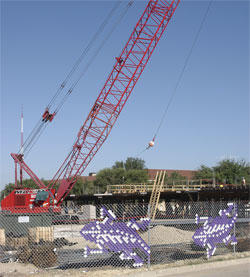 Students can expect a whole new campus to develop over the next two years as TCU’s $100 million Vision in Action project moves forward, turning the university into a walking campus, according to the TCU Web site.Construction around campus will be occupying most of the Main Campus over the next two years, as a new student union and four dormitories are constructed in front of the Student Center, said Don Mills, vice chancellor for Student Affairs.

Chris Reed, a sophomore business major, said he was annoyed with the construction in front of the Student Center.

The increasing size of TCU will not affect enrollment, said Mills, adding that he hopes the construction will make the university more conducive to student learning. Since campus will be more traversable by foot, students will be better able to interact with faculty and other students.

The construction of the new union will allow for the current student center to be renovated into an academic building.

In comparison, the new student union will have 130,000 square feet, as opposed to the current student center, which is 83,000 square feet. Flanking the new dorms will be two open walkways that will extend along the new residence halls to the new student union. The new dorms will house 315 students in addition to those already living on campus, according to the TCU Web site.

The walk-friendly campus will also allow for the new union to be used not only by students living on campus, but by everyone who comes to the university. This coincides with the plan “to bring the academic programs and the residential programs together,” Don Mills said in a Fort Worth Star-Telegram article.

Mills said he believes that if students are encouraged to stay on campus, they will “be doing quite a bit more of student learning because the longer you stay on campus, you learn more about diversity, you learn how to work in groups.”

Mills added that he hopes the new facilities will allow TCU to have “programs that cost nothing, to encourage student learning.