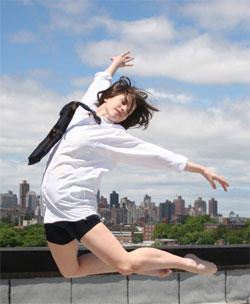 Although you would never guess it from her laid-back attitude and upbeat personality, Leslie Scott, 24, works non-stop.”I don’t sleep,” Scott said. “But it’s okay!”

Scott, who graduated from TCU in 2004 with a bachelor’s degree in modern dance, now runs her own dance company and photography studio in New York. She also works with a dance booking agent, Jodi Kaplan, and renowned dance photographer Lois Greenfield.

In order to pay her dancers and allow her company to travel, Scott also waits tables at Buddakan, an upscale Asian restaurant in New York City.

The busy work schedule doesn’t bother her, she said.

Scott’s modern dance company, BODYART, returned to New York on Aug. 25, after 11 performances at the Edinburgh Fringe Festival in Scotland.

Although she started BODYART in 2002 while attending TCU, Scott said this year, because of the festival, the company is starting to take off.

According to the Fringe Festival Web site, it is the world’s largest arts festival, running from Aug. 5-27 and featuring over 28,000 dance, theatre and musical performances.

This year, more than 1.5 million tickets were sold, according to the Web site.

“It was such a learning experience for everyone,” Scott said.

At the Festival, BODYART performed a piece entitled “An Hour About an Hour,” which Scott choreographed. The piece featured dance, spoken word and projected photographs.

Scott said she often uses photographs to complement her choreography.

Allie Stevens, a senior modern dance major, said Scott’s understanding of both photography and dance allows her to merge the two.

“She excels in both arts and is able to combine them when doing dance photography,” Stevens said.

Although Scott was neither a photography major or minor, she did take several photography courses at TCU. She also attended classes at the International Center of Photography in New York, Scott said.

While still attending TCU, Scott said she began using dancers as subjects for her photography assignments.

“The next logical step was to start getting paid for it,” she said.

The company focuses on photography for universities, young dancers and emerging companies, she said.

For the past three years, she has visited TCU in the fall to take headshots and body shots for the senior dance majors to use for auditions after graduation.

Scott said she looks forward to taking TCU dance pictures every year because the dancers and faculty are like a surrogate family to her, she said.

“It worked out really well,” Scott said. “Because I have experience dancing, I know what kind of photos and images they need. I also have a press background though, so I know what press images they will need.”

Her press experience comes from Kaplan & Associates in New York where she helps book and negotiate contracts for dance companies, such as the American Repertory Ballet.

“I was helping put together press kits for a lot of different dance companies,” she said. “I saw how important photos were for them.”

“If you’re in the dance world, you know who Lois Greenfield is,” Roberts said.

Having worked with Greenfield since her graduation, Scott says she now has more creative input.

“The longer you’re with her, the more opportunities you have to be artistic with her,” she said.

While Greenfield became famous for her rehearsal and out-of-studio shots, Scott said she now does primarily studio shots.

“It’s interesting to see her roots, because I think that’s kind of the way I’m starting to work,” Scott said. “I like to go to rehearsals. I like to take dancers outside of the studios.”

Recently, Scott did an underwater photo shoot with some of her dancers.

However, trying to run two of her own companies while also working alongside Kaplan and Greenfield gets hard to balance, she said.

“It’s hard to not give all of your ideas away to something that’s not yours,” she said.

Roberts, who taught Scott while she was a student at TCU, said, “She’s really adept at expressing herself in a variety of ways.”

Scott said she can express herself well because she’s not just a dancer or a photographer; She’s “a designer of space.”

“I’ve always been a very interdisciplinary person,” she said. “I think that I’ve always looked at things from different angles. At the end of the day though, it’s really about designing space, whether it’s on a person, a photograph or a painting.