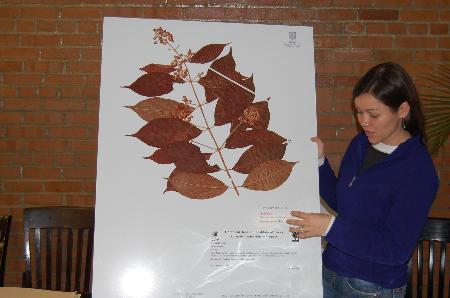 Inside an unassuming red brick warehouse downtown, the Botanical Research Institute of Texas houses more than a million rare, dried botanical specimens. Among the millions of botanical species are some discovered by TCU students.

Rebecca Repasky is one of these students. Repasky, who graduated from the university with a masters in biology, participated in a collaboration between BRIT and the Andes to Amazon Biodiversity Program, which researches relationships between organisms and their environments in South America.

The program is mostly funded by a $2.3 million challenge grant awarded to BRIT by the Gordon and Betty Moore Foundation, said alumna and BRIT collections manager Tiana Franklin. The grant required BRIT to make a commitment to education, which in part lead to the collaboration between the university and the institute, Franklin said.

During her time in Peru, Repasky discovered a new orchid species, she said. Without the opportunity the university provided her, she never would have had this experience, she said.

“Without a doubt this was the best experience I had at TCU,” Repasky said. “TCU and BRIT gave me the chance to make a difference in the world, and that’s really special.”

She participated in the program at first because funding was available and she couldn’t miss the opportunity to do hands-on research, Repasky said. Repasky, who received funding for one year, said she had to decide between studying bat feces or orchids, and the choice was simple.

During her stay, Repasky lived among locals and fellow researchers in Peru’s Cloud Rainforest. Each day she walked the preset trails and noted every plant or flower within her area, she said.

One day, she noticed a flower she hadn’t seen before, she said. She took pictures of the specimen and collected samples, which she sent to Eric Christenson, one of the world’s top orchid experts, to analyze.

Christenson said it was fairly easy to recognize that Repasky’s findings were a new species.

“Sometimes it can take months to determine if a specimen is a new species or not,” Christenson said. “In this particular case it was fairly simple, with only 20 of species between Peru and Bolivia, it was easy to recognize that this plant was not like the rest.”

Repasky said the process of identifying the orchid can be an arduous task because there are an estimated 30,000 different types or orchids.

Christenson said the entire plant is about as big as an index finger and the flower itself is bigger than a pinhead but smaller than a fingernail.

Repasky said Stellilabium cuscoense’s appearance is unique. The yellow and purple flower looks exactly like a female version of a particular insect, she said. The male insect, in attempts to mate with the flower, ends up pollinating the surrounding area.

The culture shock and difficult research was all worthwhile the moment her discovery was officially labeled a new species, Repasky said.

“I lived off just potatoes and rice for a year, which was really difficult,” Repasky said. “Research is hard, and it doesn’t always turn out perfectly but a moment like this, where I made a discovery and a significant contribution to science, made the whole experience, including the meals, worth it.”