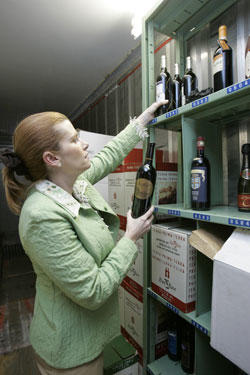 A TCU alumna and her husband left positions in the corporate world to open The Wine Frog, an importer and distributor of small-label wines.Natalie and Jacques de La GiraudiÂre said they opened The Wine Frog over two years ago because they wanted freedom and independence in a business.

“We were ready to risk everything to have something of our own,” Natalie de La GiraudiÂre said.

She said the name Wine Frog is derived from the derogative term “French frog” and is also a “wink to the local mascot.”

“We hesitated because it was a little light-hearted, but we wanted something that was going to be fun, not snobby,” she said.

The couple met in France 12 years ago and aims to make good wine accessible and affordable, she said.

“We sell wines between $12 and $35 and visit most of the wineries that we buy from,” she said.

“Wine is no rocket science,” he said. “We want to give a little insight to how wine is made and the region it comes from. We want to make it simple.”

The Wine Frog distributes to places like King’s Liquor, Majestic Liquor Stores, and Central Market . Johnathan Clark, a wine buyer for Central Market, has worked with the owners of The Wine Frog since it opened and said he can always expect quality from the de La GiraudiÂre.

“If you wanted to typify a Fort Worth wine company, it would be The Wine Frog,” he said.

But the de La GiraudiÂre’s said they try to go beyond distribution.

“We do wine dinners at restaurants and country clubs and hope to do seminars on Spanish wine or the Rhone Valley,” Natalie de La GiraudiÂre said.

Jacques de La GiraudiÂre said requests have been made for custom wine trips.

“This is something we are going to look into,” he said. “It’s what we’re all about – not being too much of a corporation but being very accessible and into wine education.”

Labels with The Wine Frog logo are placed on bottles to differentiate the wine from products sold by larger corporations, Natalie de La GiraudiÂre said.

“The label represents a wine we’ve selected and are proud of and is of particularly compelling value for the customer,” she said. “It is revolutionary because usually a wine will be sold by a large distributor and customers will only buy it because it’s a nationally recognized brand.”

The Wine Frog has 12 employees and though both owners said they want to keep the business small, they said they have been thinking about expanding beyond Texas.

“When the time comes, we would like to duplicate this same concept but not grow out of control,” Jacques de La GiraudiÂre said.

Jacques said opening a small business has ups and downs, but to not be afraid.

“Always think with satisfaction of what you have accomplished,” he said. “Once you taste freedom in entrepreneurship it can be difficult to go back.”