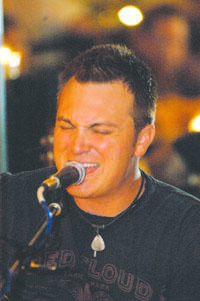 The Wineroom had an eclectic mix of young professionals and older couples cuddling up to hear Pointer perform.

With a soft mix of blues and Texas country, Pointer has made a name for himself on the Fort Worth and TCU music circuits.

Pointer played some songs from his third and latest CD, “Sixes and Sevens,” tentatively due out in October or November. This is Pointer’s first professionally produced album, and is sponsored by big names such as Miller Lite.

Pointer, who writes all his own music and uses “relationships, current and past” as inspiration, described the album as “full of energy … Texas energy.”

Pointer said the biggest difference in having his latest album professionally produced is an “extra set of ears.”

“It makes it easier to be working with people who know music,” Pointer said.

Pointer started playing guitar at age 8 and said growing up in Fort Worth gave him his strong background in blues and country.

Pointer gained much of his musical direction from local blues legend Dave Millsap, whom he worked with at an early age. He also adds Texas icons Pat Green and Corey Morrow as prevalent influences on his music.

Pointer has played all types of venues, including big names like Billy Bob’s Texas when he was only 17, an experience he described as “intense”.

While at TCU, Pointer played with a couple of bands for fun, but did not start playing professionally until he graduated.

Pointer said he is now trying to rebuild his TCU following since many of his old TCU fans have graduated. He has played a few shows for different Greek organizations and is trying to enlarge his following among Greek students.

Currently, Pointer performs solo around Texas as well as with his band, The Stephen Pointer Band. His first show at the Aardvark will be Saturday with James McMurty.