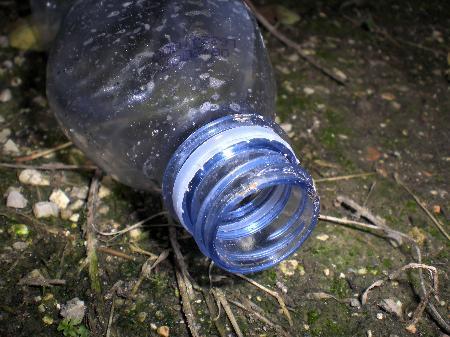 This summer, I learned more than I expected. I didn’t undergo any life-altering experiences. I didn’t change my philosophical views either.

I guess I didn’t as much learn something as I realized something: Americans are obliviously wasteful.

The funny thing is, I didn’t come to this realization due to a blatant example of wastefulness. I didn’t see someone spend thousands of dollars on brand-name clothing. I didn’t witness someone maxing out his or her credit card for a car he or she couldn’t afford. In fact, it started when I saw someone throw away a plastic bottle.

According to earth911.com, Americans buy an estimated 28 billion plastic bottles every year, and nearly eight out of 10 of those find their way to a landfill. In other words, Americans only recycle 20 percent of what they could.

I’ve recycled off and on over the years, but this summer I realized just how much we could recycle. My family hosted a series of get-togethers, which were followed by a mountain of plastic bottles, aluminum cans and cardboard boxes. So, my mom and I started a Kanyer family recycling program.

Everything from aerosol cans to paper bags can be recycled, but how many of us have made an effort to save our paper grocery bags and place them in a recycling bin?

Thankfully, not only are individuals taking notice of wastefulness in the U.S., but cities are, too.

Seattle recently made an attempt to apply a 20-cent tax to every plastic bag used in grocery stores. The city council passed an ordinance, which went to a petition, which was eventually referred to the public vote. Although the measure was defeated 58 percent to 42 percent, the idea awoke Washington voters to the fact that plastic bag use can be reduced.

I’m sure some of you are thinking that the idea for a bag tax is a master plan thought up by those involved in the plastic bag industry; it can’t be an attempt to reduce, reuse, recycle. But that’s just not the case.

According to seattlebagtax.org, the Northwest Economic Policy Seminar, a group of economists, are backing the tax. The Web site says the Seminar has “no connections with the plastic bag industry and have received no remuneration in any form for looking and commenting on this issue.”

Recycling isn’t the only solution however. I’m about to reveal a groundbreaking innovation, one that is going to change the country. It’s called resourcefulness, and Americans haven’t done too much to support it.

And if it weren’t for those who are already recycling, it could be worse. Think about it.

It isn’t that difficult to reuse plastic water bottles. Also, you can use an aluminum canteen instead of grabbing a plastic water bottle from the fridge every day. The water won’t be from a mountain spring, so you’re going to have to suck it up and drink – gasp – tap water.

As TCU students, we’re fortunate to live on a campus that has recycling bins next to almost every garbage can. It’s not difficult to throw your plastic, cardboard and newspaper in the round, blue thing with that funny triangular symbol on it.

Also, you can save energy by using natural light during the day instead of leaving your lights on. Maybe take a ten-minute shower as opposed to a thirty-minute one.

I’m not saying you have to live like it’s the Dark Ages. Just be conscious of how much you use and consider how much you need.

The more effort the public puts toward resourcefulness, the more companies will take notice, which could lead to a conservation reformation of sorts. Maybe that’s wishful thinking. I just know we can do more. And it all starts with realizing that a series of small steps can lead to a great movement.