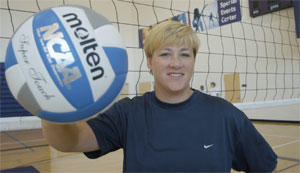 TCU student-athletes and coaches have divided opinions over an increasing lack of women coaches in college athletics.As reported by The Chronicle of Higher Education, despite a growing number of female athletes, female coaches for women’s sports have declined since Title IX became law in 1972. The federal legislation outlined a series of guidelines to provide equal opportunity for both women’s and men’s collegiate sports.

Although the Title IX statute makes no restrictions on the number of women coaches a school can employ, women’s sports headed by a female coach have fallen from 52.4 percent in 1982 to 44.1 percent in 2004, an 8.1 percent drop. TCU currently has three women head coaches for nine of its women’s sports.

“The applicant pool on the men’s side is much larger than the women’s,” Morrison said.

Even though the breakdown of available applicants is unequal, Morrison said, the administration tries to compile the most diverse pool of candidates possible. He said the problem then becomes using objective means to narrow the field down to the most qualified individual – regardless of gender.

“I think our challenge is really finding the best person for the job,” Morrison said. “We want coaches who are interested in caring about the students.”

Morrison said he looks at women’s tennis head coach Dave Borelli as a prime example of hiring trends. Borelli, who was hired in June 2002, coached the women’s tennis team at the Universtiy of Southern California to seven national championships.. Morrison said Borelli’s hiring had nothing to do with his gender and everything to do with his rÂsumÂ.

“How many times do you have a coach that’s won seven national championships in your (candidate) pool?” Morrison said.

As both a former college athlete and head coach, Morrison said he thinks student-athletes pay more attention to ability than gender in their coaches.

“I think athletes want a coach that is extremely knowledgeable and well-disciplined,” Morrison said.

Rifle team head coach Karen Monez agreed with Morrison but also said that some women, if experienced enough, could coach both men and women.

“As long as they have the expertise necessary for whatever they’re coaching, I see no difference,” Monez said.

Even though Summitt stayed with the woman’s program, the thought of a woman coach, even one with Summitt’s rÂsumÂ, created a national stir that lasted for several weeks.

TCU women’s golf head coach Angie Ravaioli-Larkin said there are positives and negatives when dealing with a gender difference between coach and student-athlete.

“As females, we are taught to please men from a very young age, and a lot of female athletes are raised to perform well in that regard,” Ravaioli-Larkin said. “Female coaches offer a sense of understanding in their coaching style because they’ve been there and know what the female athletes are going through.”

Ravaioli-Larkin said that she was coached by both a male and female coach in college. She said that while the styles were different, she benefitted from both.

The reactions of TCU athletes having a coach of the opposite sex were mixed.

Junior Celeste Green, who is on the rifle team, said women coaches may not be a good idea in certain men’s sports, especially ones that emphasize physicality and aggressiveness.

“In a sport like rifle, (women coaches are fine), but in football or basketball, I don’t think that would work,” Green said.

“I wouldn’t be dying to be recruited by (a female coach),” Pierce said, “but if they know their stuff, then I wouldn’t really have a problem with it. I don’t see it as a big deal.”

Monez said that reactions depend on every athlete’s mind-set.

“I think every one would react differently,” Monez said.