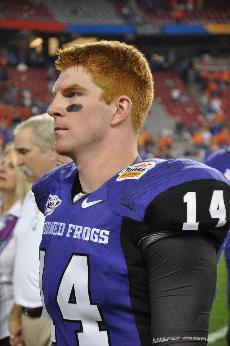 Dalton is the nation’s leader in wins (29) by an active quarterback. His 29 victories also tie him with Slingin’ Sammy Baugh (1934-36) for the most in TCU history.

Dalton, the 2009 MWC Offensive Player of the Year and an honorable-mention All-American, was eighth in the nation in passing efficiency last season with a 151.8 rating. Among active quarterbacks, he ranks third in lowest career interception percentage (2.4, 24 picks in 1,001 attempts).

Dalton has led TCU to top-10 rankings each of the last two seasons. In 2009, he guided the Horned Frogs to their first BCS appearance.

A two-time bowl game Most Valuable Player, Dalton ranked fourth on TCU last season with 512 yards rushing on a 4.4 per carry average. He has 1,176 career yards on the ground.

Walter Camp, “The Father of American football,” first selected an All-America team in 1889. Camp, a former Yale University athlete and football coach, is also credited with developing play from scrimmage, set plays, the numerical assessment of goals and tries and the restriction of play to 11 men per side. The Walter Camp Football Foundation (www.waltercamp.org) – a New Haven-based all-volunteer group – was founded in 1967 to perpetuate the ideals of Camp and to continue the tradition of selecting annually an All-America team.

The Maxwell Award has been presented to the outstanding collegiate football player in America since 1937 and is named in honor of sportswriter Robert W. “Tiny” Maxwell.