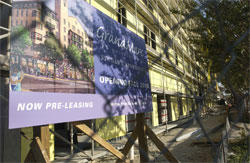 Although TCU owns the land where GrandMarc is being built, Phoenix Property Co., a Dallas-based development and management firm, will lease the land from TCU and manage the apartments, said Don Mills, vice chancellor for student affairs.

Over the years, enrollment has increased but available housing has not, but Mills said TCU officials hope to see a residential campus again.

“We are hoping that GrandMarc will bring 644 students back to campus,” Mills said.

The apartments will provide housing for many students, but should also provide parking relief on campus, although the parking will be reserved for residents.

“Five hundred eighty-two students who would otherwise be parking in campus spaces will be parking in GrandMarc’s parking garage,” Mills said. “When you think of it like that, the GrandMarc should actually help the parking situation on campus.”

The five-story residential community will include pool and deck areas, landscaped courtyards, a media room, game room and a fitness facility.

“GrandMarc differentiates itself by providing housing environments that are educationally focused,” Reed said.

Students, GrandMarc residents and surrounding neighborhoods will be able to use the 14,581 square feet of retail space located below GrandMarc units.

“Potential retailers are unknown, but one thing is for sure, students can expect to see Perrotti’s Pizza,” Reed said.

GrandMarc at Westberry Place is the first major development on Berry Street, and Mills said it is expected to spark more development.

“We hope to see more stores and restaurants open on Berry Street so TCU students and GrandMarc residents will have a variety of choices close to them,” Mills said.

Financial information concerning rental rates and project expenses is not available at this time because information is subject to change during construction, said Sally Rush, vice president of administration for Phoenix Property Co.