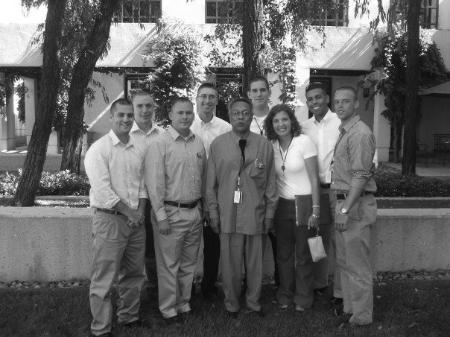 Not so “top secret” are the achievements of one cadet.

June Lietz, a senior radio-TV-film and history major, spent last summer around top-secret activity, but her internship for the Army Science Board, a problem-solving board made up of civilians, wasn’t too covert.

Lietz, the only woman cadet intern, along with eight cadets from across the nation, analyzed the Army’s marketing campaign for recruiting and retention. Together they spent a total of four weeks – two in Newport Beach, Calif., and two in Washington – creating a presentation for the Pentagon and Senate.

Walking through the doors of the Pentagon or headquarters of the Department of Defense in civilian clothes to brief some of the country’s top military leaders became normal for her.

“It was a big opportunity for me at 21 to be talking with these huge people that make incredible decisions for the Army and ROTC,” Lietz said. “It was pretty intimidating.”

Lt. Col. John Agor, professor of military science, said he recommended Lietz for the panel because she represents the ROTC well.

“She is extremely intelligent and very personable. She was able to give the Army some great feedback,” he said.

Her mother was a signal core officer for 20 years and her father retired with 27 years of service as an infantry officer.

“It’s kind of like the family business,” she said.

On her mother’s side, 13 members have served or are serving in the military, she said.

“I feel like every generation has an obligation to do it, and my brother and sister aren’t, so I was like, ‘I can do it,'” she said.

Growing up in the military, Lietz has been around the world, from where she was born in Colorado to Germany, Kansas, Belgium and North Carolina, where her family currently lives.

Lietz said the hardest thing she had to overcome in ROTC is being a woman. She said she had to prove herself as an equal.

“Some of the guys think, ‘she can’t do it,’ but once they get to know me, they realize I can do it,” she said.

Agor said he believes Lietz has the personal and leadership skills to succeed anywhere.

Facing adversity with a great attitude is one Lietz’s strengths, he said.

This summer, Lietz said, she will attend a course in Fort Lewis, Wash., and commission. Commission is the transition from cadet to an officer after she completes the course. A month later she will find out which branch of the Army she will join. She said she ultimately would like to be part of the Medical Service Corps.

“She will have a great career for as long as that may be in the military as a leader,” Agor said. “When she eventually rejoins corporate America, whether it is four years or 40 years after military service, she will be widely sought after.”

Besides being in ROTC, she also stays busy as president of Diamond Darlings, as a member of Student Foundations and as part of the Texas Rangers promotion staff.