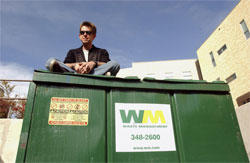 Most people don’t think of the dumpster behind Panera Bread as a bakery or the trash pile behind Target as a supermarket, but for eight months, one TCU criminologist did.Jeff Ferrell, a professor of criminal justice, recently released his book “Empire of Scrounge” that details the eights months of dumpster-diving he did in Fort Worth.

After Ferrell, who grew up in Fort Worth, left a tenured post at Northern Arizona University in 2001 over a disagreement with administrators, he took the opportunity to live life as a scrounger.

“It was the way of life that I always wanted to explore,” Ferrell said. “I wanted to know how they lived and this was my chance.”

Ilene Kalish, the editor of “Empire of Scrounge” and executive editor of the New York Press, said the topic and Ferrell drew her to the story.

“Everyone loves garbage, so it’s a great topic, but more than anything, it was because (Ferrell) was writing it,” Kalish said. “Also, everyone has a story about something they have found on the street, so we can all relate to his topic.”

Ferrell said he not only found treasure in other people’s trash while digging through dumpsters, but also met and came across a wide range of characters in the process.

“It’s not just the poor person kicking around the can,” Ferrell said with a smile. “It was the Church’s Chicken employee still in his uniform looking for stuff to use, the artist looking for materials to be used or the scrap holder that hauled metals to be sold.”

Ferrell’s experiences center around trips on a scrounged BMX bike to diving locations in search of objects that could be reused, refurbished or resold for money to buy life’s essentials.

His loot varied from pennies to more expensive items, such as a pair of antique baby doll shoes still in the box that resold for hundreds of dollars.

Ferrell relied on the sale of his scrounged goods and his wife’s wage of $9.50 an hour to get by as he waited for a book deal.

In his book, Ferrell also offered advice for the scrounger-to-be.

“I’d rather not be noticed when scrounging a trash pile,” Ferrell wrote in his book. “My preferred and often-practiced approach therefore is the trash pile drive-by: a quick rolling stop, a quick look through the pile, an item or two plucked, and then off again.”

Ferrell said he had to take these precautions to minimize the risks – both criminal and cultural – of dumpster-diving because one can face fines of up to $2,000 for scrounging in some cities.

Carol Thompson, a professor of sociology and the chairwoman who hired Ferrell, said in an e-mail that Ferrell’s dumpster-diving was just another sign of the great work he has done in describing human cultures.

“I thought this was an ingenious direction for his work,” Thompson said. “‘Empire of Scrounge’ emerged from those intensive months of research and the book is innovative in its content, form and presentation.”

Ferrell will have a book-signing from 2 p.m. to 4 p.m. Saturday at Connections Bookstore at 2416 Forest Park Blvd.