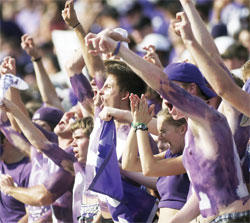 Mix 52 parts red, 42 parts green, 123 parts blue, and you might get something any TCU student will recognize: TCU purple.The color has been a part of the university’s image since 1896, the same year the university played its first football game against Toby’s Business College.

One hundred and ten years later, the color choice is drawing some criticism from The Associated Press national sports writer Nancy Armour.

Armour classified colleges and universities on their football teams’ fashion sense, and TCU came in at No. 2 in her “really ugly” category.

Director of Athletics Media Relations Mark Cohen, whose office monitors TCU’s media attention, said he read the article but didn’t get any feedback from fans or others in the athletics department.

“I think that people read it and shrugged their shoulders, and that was it,” he said.

Armour began by criticizing the university’s color choice along with the team’s mascot.

“Purple is never a good color choice,” Armour writes, “and the mascot is ugly.”

The Horned Frog, like the color purple, has also been part of TCU for over a century.

Colby Hall, longtime dean of TCU, wrote about TCU’s association with the lizard in his 1947 book “History of Texas Christian University.”

The creature was first associated with the school’s yearbook, The Horned Frog, published for the first time during the 1897-1898 school year, he wrote.

The lizard’s association with the university grew over the years and was eventually adopted as the official mascot, according to Hall.

Chancellor Victor Boschini said he didn’t see Armour’s article until he was asked about it by the Skiff.

“Obviously, I disagree with everything this person’s saying,” he said.

Boschini said he appreciates the school’s mascot because it’s so unique.

She dealt her final blow in a criticism of the team’s uniforms.

“Putting those triangles around the sleeves took it to a whole new level of bad,” Armour wrote. “Please remember the players will have to show these pictures to their kids someday.”

Mike Sinquefield, director of football operations, said somebody e-mailed him the article.

“Everyone has their own opinion,” Sinquefield said. “The one that matters most is our kids’ opinions, and they like what they’re wearing.”

Sinquefield designed the uniforms when he was an equipment manager in 1998. When TCU changed from head football coach Pat Sullivan to Dennis Franchione, Sinquefield was asked to come up with new uniform designs.

That’s when he introduced the triangles on the uniforms’ neck and sleeves, which represent the horns on a Horned Frog.

“It was really just a way to put something on the trim that was a little bit different,” he said.

“Our look is something unique,” he said, “instead of being the norm like everybody else.”

Lewis is in charge of distributing about 450 uniforms the team owns and said even as TCU looks into uniform changes for next season, fans can count on the trademark triangular trim.

Sinquefield said the changes planned for next season likely won’t be cosmetic and will be subtle changes, not ones easily visible to the naked eye.

As for the color choice, Sinquefield said he’s “got plenty of experience with purple.”

He said his previous jobs at East Carolina and Louisiana State universities left him with an appreciation for the finite differences among the color’s various shades, and TCU’s “deep, rich, royal purple” is one-of-a-kind.