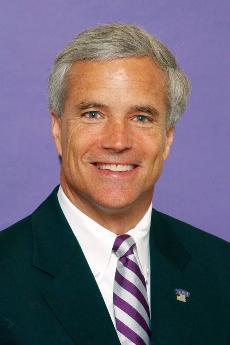 Editor’s note: This story was revised for accuracy at 11:26 a.m. Thursday.

The resignation of Morrison should not break the football team’s focus, Cohen said.

“I think the football team appreciates everything Danny Morrison has done for TCU as a whole, but they will continue to prepare for Virginia,” he said.

Although Chancellor Victor Boschini said it was too soon to begin thinking about who will permanently replace the 55-year-old North Carolina native, a search began right after Morrison resigned at 12:30 p.m. Wednesday.

More changes arose when the athletics department postponed Saturday’s Meet The Frogs event, which is a long-standing tradition with fans, players and coaches.

Scott Kull, associate athletics director for external operations said the event was canceled “in the best interest of the football team.” Kull declined to comment further.

Morrison was hired to be the new Carolina Panthers president a day after Mark and Jon Richardson, sons of owner Jerry Richardson, resigned from their positions as team and stadium presidents.

Charlie Dayton, director of communications for the Panthers, said Morrison and Jerry Richardson have known each other since Morrison was in college, so the decision to hire him was easy.

“The owner and Morrison had a familiarity, so it wasn’t like they were starting from zero,” Dayton said. “When we had the vacancy, he was already a person of interest.”

Dayton said the situation was not planned, however, and was something that arose in the last few days.

Morrison is due to start his new position in about a month, he said.

Dayton refused to comment on how much money Morrison was offered for the job.

Morrison was the director of athletics for four years and will continue to fulfill his duties until he begins his new position, according to the university’s athletics department.

Babb and Morrison will be working together until Morrison leaves at then end of September, Morrison said.

While Morrison was athletics director, he brought 16 out of the 20 university sports to the postseason, 12 of which were nationally ranked.

“One of the benefits of a new person taking the job is that they look at things a little bit differently,” Morrison said. “I hope to see them continue the great momentum we have here.”

Morrison said he believed he had one of the best jobs in the country but is excited for new challenges in Carolina.

“It is somewhat of a blessing to have a fabulous job here, then to have an opportunity for another incredible job with the Panthers,” Morrison said. “It’s tough to leave a great situation like this, but there’s also the challenge of working in the NFL.”