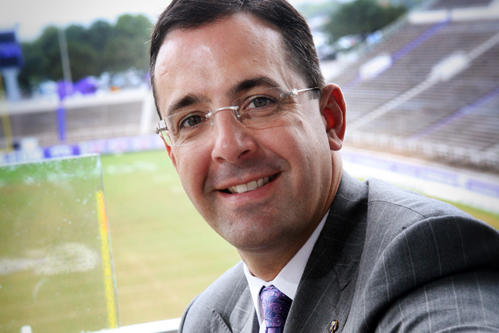 Athletics Director Chris Del Conte came to TCU in 2009 with a mission. He had a well-earned reputation as a fundraiser from his time at Rice University and the University of Arizona, but this is a whole new ballgame.

He was tasked with a $105 million renovation of the west and north sides of Amon G. Carter Stadium. It would be the stadium’s first facelift since the upper deck was added in 1956.

And Del Conte’s task was just as daunting8212;he had just over four months to scramble together $90 million dollars.

“[Del Conte] organized it and made it happen,” Chancellor Victor Boschini said. “People think this was easy because it happened quickly, but it took a lot of time from somebody and that was his time.”

Through the combined efforts of the athletic department, Boschini’s administration and the TCU Board of Trustees, they announced the result on Aug. 18 with a press conference. According to Boschini, Amon G. Carter Stadium will be the only college football stadium in the country paid for entirely by donor funds.

But in order to set the stage for Del Conte’s fundraising blitz, TCU needed a plan in place. Board of Trustees Chairman Luther King tapped Clarence Scharbauer, vice-chairman of the board and half of Scharbauer Hall’s namesake, to get to work.

His inspiration was simple.

“Frankly, I love TCU,” Scharbauer said. “I have a unique perspective as an alumni of TCU, a board member for 20 years and having had two daughters and a son-in-law go through there. So I’ve seen all three perspectives and have a strong passion for TCU.”

The project began about four years ago, when King appointed Scharbauer to form a committee to look into stadium options. The board wasn’t sure if they would be building a stadium from scratch or refurbishing what was there.

Scharbauer had the renovation crawling, but the Amon G. Carter Foundation quickly got it walking, and then brought it to a sprint with an early gift of $15 million.

“By giving us the pledge that they did and the money they did up front, we had the money to spend to hire architects and marketing firms and things like that,” Scharbauer said.

The Americans with Disabilities Act (ADA) passed in 1990 said that any new construction, including modifications made after July 1992 had to be brought up to the new standards.

Therefore touching Amon G. Carter Stadium, for any construction after 1992 would have led to a financially burdensome renovation, of over $200 million according to Scharbauer. That’s one reason the stadium club was built into the John Justin Athletic Center in 2008, as opposed to being attached to the stadium.

The main changes in the plans were the ADA redo, the addition of elevators, points of commerce and bathrooms, Boschini said.

In the end, the Board of Trustees approved Scharbauer’s committee’s plan to modernize the stadium, while expanding its footprint to the edges of the hill. But the approval was just for fundraising, which was made tougher by the state of the economy.

“There were some skeptics [on the board],” King said. “Not that they didn’t want to do it, but they didn’t think in this economic environment [it was possible to raise the needed funds.]”

But while the economy put doubt in some, it wound up making the project possible.

Scharbauer said low construction costs, as well as interest in the BCS-bound football program and legwork done by the stadium committee led to their “perfect storm.”

“Construction costs right now are as low as they’ve been in a long time, and there’s a lot of people wanting the work8212;so we had a perfect storm,” Scharbauer said.

Del Conte, still somewhat new on the job, which he began last November, set out with Boschini and Head Coach Gary Patterson to fundraise.

“We had a great message to sell,” Del Conte said. “[Former Athletics Director Danny Morrison] had laid a great groundwork in terms of what the stadium was going to be, we had identified individuals that could help and then [my job] was just to put the team in place to go out and do what we needed to do.”

Scharbauer said some delays in getting donor paperwork completed made the school miss its self-imposed July 1 deadline for fundraising, but Del Conte had all the money committed within four months.

In the press conference to formally announce the stadium renovation earlier this month, Boschini, King, Del Conte and Patterson all took the podium to give thank yous not only to the donors, but to those who invested their time in the project.

But none of them could have made the project happen without one another, according to Del Conte.

“It was a daunting task, but I never doubted TCU and never doubted the support of our people,” Del Conte said. “That resonated from our chancellor. When I asked him if we can do this, he said, “No doubt. This is TCU.’ When you have that type of confidence in your Board of Trustees, from Clarence Scharbauer to our chancellor, then it can be done.”