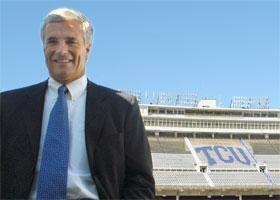 TCU, please welcome the newest family of fans to the world of Horned Frog athletics: the Morrisons.”There’s absolutely no question about it, my passion is with TCU sports,” said athletics director Danny Morrison, whom TCU hired in May.

Even though traditional norms call for executives to be calm and collected, Morrison said, he thrives on the intensity of college athletics.

“Sometimes my outside doesn’t reflect the churning of my inside,” Morrison said. “You do love the competitive fire, the passion of rooting for a team – and the reason is because you care.”

Morrison said the purple fire burns not only for him, but also his family. Morrison and his wife, Peggy, have two college-aged children.

“They’re big-time Frog fans,” Morrison said. “They always call to get the scores and updates on the football games.”

“I’ve been in and around sports since I was young,” she said. “When we get involved, we go full force.”

The Morrisons’ energy fits in well with college student bodies, which have long been both complimented and criticized for their game-day intensity.

“One of the best parts about being on a campus is being around young people,” Morrison said. “You can really feel the emotion, the adrenaline.”

“He’s a guy who looks for the positives in the athletes and staff,” Patterson said. “With all the negativity in the world, it’s important to have the positives in mind when you deal with these kids.”

Morrison has extensive experience with student-athletes. Before joining TCU earlier this year, Morrison served as the commissioner of the Southern Conference, based in Spartanburg, N.C.

Peggy Morrison said that as commissioner of the Southern Conference, her husband had to adjust to the loss of a specific student body to be a part of.

“He really missed that environment, being with the kids,” she said.

Danny Morrison said the role of commissioner has a tricky way of eliminating partisanship.

“Conference commissioners have kind of a weird job,” Morrison said. “As a commissioner, you want all the schools under you to succeed. So when you go to a conference game … you can’t cheer for anybody.”

Peggy Morrison said her husband took those circumstances under consideration when deciding whether to join TCU.

“Part of the allure of coming here was that he could pull for just one team,” she said.

Danny Morrison said his time in Spartanburg helped him developed a more objective sense for athletics.

“As you watch a game, you’re really more pondering the moves the coaches are making,” Morrison said. “You’re totally taking the emotion out of it.”

Morrison said objectiveness was key in one particular realization.

“Referees are really good when you’re not cheering for anyone,” Morrison said. “That was a complete shocker to me.”

Morrison said he not only feels like a fan, but family.

“To have a reaffirmation of what I thought TCU would be like was really special,” Morrison said. “It’s even better than I thought.