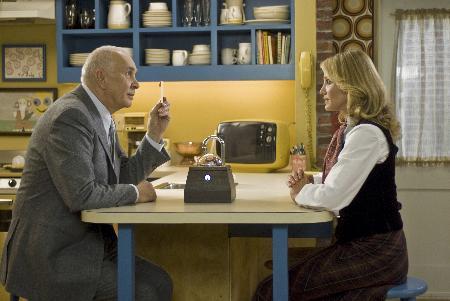 The story is deceptively simple. A suburban couple are given a box with a button and a choice. They can push the button and get a million dollars, but the catch is that someone they don’t know will die. Based on a story by legendary science fiction writer Richard Matheson that was adapted from the 1980s revamp of “The Twilight Zone,” director Richard Kelly’s latest film “The Box” has him reaching some of the same potential that was first seen in his debut, “Donnie Darko.”

The film matches the mood of horror films like the 1978 remake of “The Invasion of the Body Snatchers” and the music by some of the members of the Arcade Fire is surprisingly good. The twists that Kelly comes up with will either make you interested for the rest of the film or will take you out of it completely.

But that doesn’t mean The Box” is without its faults. Stars Cameron Diaz and “X-Men” actor James Marsden don’t really seem up to the job of making the concept stick. Although it seems like nitpicking, Cameron Diaz’s Virginia accent is really distracting.

However, Kelly’s “Darko” was initially released to a lukewarm box office, indifferent critics and not much fanfare. It was only after its release on DVD that the film could develop the word of mouth needed to build a cult following.

His debut was followed by two misfires that have yet to find that same group of devotees. The first was “Domino,” a Kelly-scripted Tony Scott film which was a victim of the latter’s ADD-afflicted camerawork and kinetic editing. The second was the more ambitious “Southland Tales,” Kelly’s second time out as director. Kelly gambled on a convoluted plot that revolved around an amnesiac action star, an ex-porn star, identical twins and the end of the world. Not surprisingly, audiences couldn’t get past the premise, and the movie bombed.

This time around, it’s hard to see how audiences will take “The Box.” It seems destined (or doomed) to cult success. The problem with having such a strong debut is that fans and critics will compare “Darko” to anything that follows it.

Unlike “Southland Tales,” the film is commercial, that is to say, not as confusing, but it’s not without some of the director’s signature strokes. For all of its flaws “The Box” feels like the movie that Kelly should have made after his debut. It has some of the same themes of sacrifice, a retro setting and a plot that transcends space and time. Maybe this film or the next can change critics’ and audiences’ minds that he can make a box office friendly film while retaining his creativity.

Or maybe that wishful thinking is more attuned to the universe where a teen named Donnie can travel back in time, talk to man-sized rabbits and change his own fate.

“The Box” is rated R and is in theaters now.