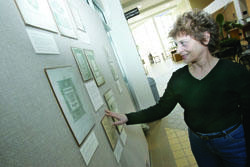 Anyone who has been in the Mary Couts Burnett Library has seen Susan Swain’s work, but few have seen Susan Swain.Swain is a library specialist who works in the library’s special collections creating the various exhibits on display in the library’s entrance, in addition to providing creative support for faculty and occasionally the chancellor’s office.

On Jan. 10, Swain became the ninth recipient of the annual Library Staff Recognition Award sponsored by the Friends of the TCU Library.

“I was very surprised” Swain said. “I didn’t expect that.”

In nearly ten years with TCU this is her first award, she said.

Swain said she attributes much of her success to her colleagues.

“I have really great co-workers,” Swain said. “They make my job easy.”

Barbara Standlee, an administrative assistant who works in the library and was on the selection committee for the award, said Swain was a unique candidate because her efforts often go unnoticed.

“She works so much behind the scenes that not everyone knows what she does” Standlee said. “She does the exhibits in the library, and she helps me with graphics.”

Standlee said it was Swain’s willingness to do these things that sets her apart from other nominees.

“We were all delighted because we thought Susan was very special,” said co-workert Laura Ruede. “We’ve been trying to get her recognized for a while.”

Ruede said it is very difficult for people who aren’t in the public eye all the time to get recognized. She said she and several others wrote letters to the selection committee, which were quoted by Friends of the TCU Library President Susan Hotard at the luncheon.

Library Assistant Lisa PeÂ¤a said she didn’t know who had won until the last second when she heard the words of herself and her colleagues coming out of Hotard’s mouth.

“We were so especially tickled that Susan won it,” PeÂ¤a said.

Swain was one of 19 eligible staff members nominated for the award in November. She was selected based on the recommendations of her peers and several faculty members, Standlee said.

Hotard said in her luncheon speech that Swain has completed a master’s degree at TCU and is currently pursuing teacher certification in art education, in addition to her full time job as library specialist.

Standlee said Swain is “a woman of many talents who quietly works behind the scenes.”

Swain’s name was added to a plaque of award recipients which is currently on display next to Bistro Burnett in the library.