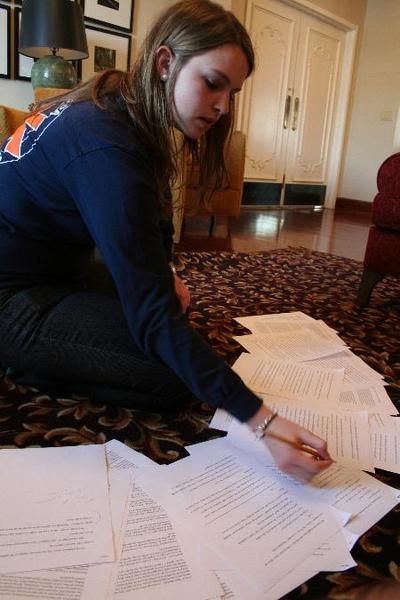 For most, the airport is a place for departures, arrivals, goodbyes, reunions, hugs, kisses and sometimes tears, but for sophomore writing major Kelli Trapnell, it is her favorite place for inspiration.

As businessmen with suitcases mindlessly rush to their gates and parents wearily send their son on his first trip alone, Trapnell simply watches and imagines, creating backgrounds, personalities and relationships for these people.

The airport is only one of the many places Trapnell finds inspirations – anywhere with people will suffice. She said she mostly enjoys working with emotions, effects and repercussions of relationships between people, whether it’s a story she heard in passing or it is completely in her head. Perhaps it is because of her ability to find inspiration in any given person that Trapnell became the first recipient of the Sandra Brown Excellence in Literary Fiction Award on March 3.

The endowed scholarship, established by Michael Brown in honor of his wife, author Sandra Brown, provides two years of full tuition to the recipient.

In order to be eligible for the award, contestants had to have at least 54 credit hours, major in writing or English, and most importantly, turn in 50 pages of fiction written outside of class.

Dan Williams, English department chair, said he and the four other judges evaluated the writers on their sense of craft, originality and creativity.

He said although the top three contestants were close, Trapnell had the best portfolio overall based on the criteria.

Sandra Brown also had a chance to look at Trapnell’s work and was nothing short of impressed.

“She just proved herself to be a talented writer,” she said. “What impressed me the most by her writing was the wide range and the variety in every single instance and character.”

In Trapnell’s portfolio were stories from several different viewpoints; light-hearted, humorous stories such as a man who has a fear of haircuts and a little girl from a health-oriented family who wants nothing more than a birthday cake for breakfast, and also more serious, psychological stories such as a girl who gets taken advantage of sexually and a man investigating a series of police officers killing police officers.

Ranging from friends, family, music, art, current events, favorite authors to even strangers at the airport, Trapnell’s inspirations are endless, she said.

“I will always write because it’s an emotional need that I have,” Trapnell said. “I like making stories to share with people and whether or not that leads to publication or whether it’s just me writing at my desk, calling my friends saying, ‘Hey, listen to this story!’ I will always write.”

Sandra Brown is a world-renowned author of more than 70 novels, 56 of which have appeared on The New York Times best seller list. Since her first book was published in 1981, she has sold more than 70 million books that have been translated into 33 languages. She has won a plethora of writing awards during her career and was most recently inducted into the Texas Literary Hall of Fame. Not to mention she attended TCU.

Brown said she remembers having an 8 a.m. composition class while attending the university that not everyone was a fan of.
Among the moaning and groaning of her other classmates, Brown not only did not think the class was difficult, but really enjoyed it.

“To me writing was never something I dreaded that much,” Brown said. “That was my first indication that I might have some ability and that that’s what I wanted to do.”

Husband Michael Brown said when he and his wife met at TCU Sandra Brown had a scholarship from a non-affiliated organization that required she stay single. However, after meeting and marrying him, Sandra Brown lost the scholarship.
“I just always regretted that she had to give up her scholarship because she married me,” Michael Brown said. “That’s the underlying motivation for the award.”
In addition to that, he said he also wanted to honor his wife in her career by simultaneously providing financial assistance to deserving writers following in her footsteps.

Sandra Brown’s advice for potential authors: write, write, write.
“A lot of people get caught up with the study of writing or the association of writing, and that’s good,” Sandra Brown said. “But at the end of the day people are busy doing all that and are not actually writing. You have to actually put words on the paper.”

Read an excerpt of Trapnell’s story “The Experiment”