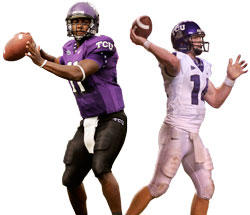 There was a familiar face on the field Saturday when TCU beat SMU.It was sophomore quarterback Marcus Jackson who stepped in for redshirt freshman Andy Dalton. Jackson is best known to Frogs fans for his performance in last year’s Baylor game, when he replaced Jeff Ballard to spark a 17-7 win in Waco.

His appearance has students debating who the right choice is to play under center Saturday against Colorado State.

Lane Hunt, a freshman premajor, said he thinks Dalton is the better choice.

“I think that Dalton should start and they need to stop switching back and forth,” Hunt said. “They should have continued playing him.”

Matt Hemenway, a sophomore athletic training major, was a TCU football athletic trainer last year. He agreed with Hunt and said both players are great options.

“Both of them have different strengths and weaknesses,” Hemenway said. “They are both very capable.”

As long as the team is winning, Austin Grajczyk wants them to play whoever is the better player on that particular day.

“If they are playing Dalton and it is just not his day, take him out of the game and play Jackson,” said Grajczyk, a freshman nursing major. “Play them for their strengths.”

“Just look at other NCAA teams like Texas and West Virginia,” Wirth said. “They are playing two quarterbacks. It is keeping the offense moving.”

Kyle O’Brien, a sophomore business major, said he disagrees with all of them.

He said they should switch roles and have Jackson as the starter.

“Dalton is just not playing up to par,” O’Brien said. “Jackson can create more with our offense.”

K.C. Holiday, a sophomore health and fitness major, said he agrees with O’Brien.

“Jackson should definitely start,” Holiday said. “He gives more to the offense and provides more variety. He is a double threat.”

Another fan of Jackson is senior advertising/public relations major Tommy Holtz. He said there should be some sort of continuity under center.

“They need to stick with one quarterback the whole time,” Holtz said. “You don’t have rhythm if you keep changing the entire game.