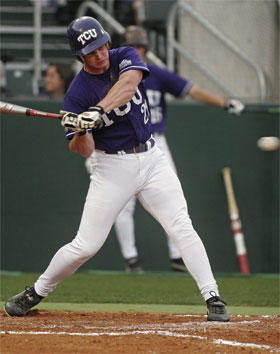 TCU’s bats have started booming – and the surge of offensive production couldn’t have come at a better time for a Frog baseball team set to host its first Mountain West Conference series this weekend against Air Force. In its last five games – a span that included four wins – TCU plated 53 runs, including 12 in the opening frame of an 18-8 victory at home Tuesday over No. 22 Baylor.

Sophomore infielder Matt Carpenter said the team has been taking a better approach at the plate as of late, driving the ball to the opposite field and making the proper two-strike adjustments.

“From the team standpoint, hitting’s contagious,” said the .309-hitting Carpenter, who has started all 31 Frog games this season. “You get a couple guys going – it’s like a snowball effect. You saw it in the first inning against Baylor the other day: A couple of hits and then all of sudden the whole team explodes.”

Junior utility player Chad Huffman and sophomore catcher Andrew Walker have been two of TCU’s hottest hitters, combining to go 11-for-18 with three home runs and 10 RBIs in the Frogs’ last two games.

Huffman has surged recently to lead to all healthy Frogs in batting by more than 50 points at .376. He’s driven in 17 runs with two home runs and 10 doubles in 26 games.

Carpenter said winning has helped the Frogs relax at the plate.

“The team’s not pressing right now,” he said. “Everything’s starting to fall into place. We’ve got some guys in some positions that are starting to come out.”

The Frogs are 16-15 and began conference play last weekend in San Diego by going 3-1 in the MWC Preseason Tournament, where they defeated Air Force 12-6 Sunday.

Arif has been TCU’s most consistent arm out of the bullpen, tying for the team lead in appearances with 17 and compiling a 3.65 ERA in 24 2?3 innings.

The preseason tournament gave the Frogs a chance to see all the MWC teams in action and play four of them. Carpenter said he wasn’t surprised by the quality of baseball in the Frogs’ new conference.

“We knew going in that the Mountain West Conference is a lot more competitive than people give it credit for,” he said. “Everybody competed to the level that we thought they would.”

Arif said the Frogs, who MWC coaches picked to finish first in the league in the preseason poll, are poised to meet those expectations.