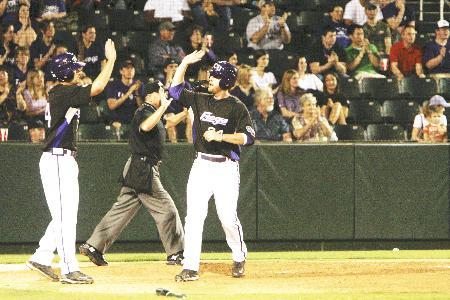 After giving up two runs in the top of the first, the Horned Frogs recovered and scored eight unanswered runs on the way to the 8-2 victory.

“That was probably the best Greg Holle has pitched since coming to TCU,” head coach Jim Schlossnagle said. “We played good defense behind him and got enough timely hits to stretch (the lead) out and we had a lot of guys throw well out of the bullpen.”

After a two-run bomb over the left field wall by Bobcat junior first baseman Paul Goldschmidt, the Horned Frogs rallied to tie the game in the bottom of the inning.

Three batters later, freshman shortstop Taylor Featherston smashed a grounder between second and third that took a funny hop and nailed Bobcat shortstop Lance Loftin in the face. Both Carpenter and Ellington scored as the ball caromed into center field.

“Anytime you can get some rebound runs it’s a great thing,” Schlossnagle said. “It gives you a chance to give the pitcher some confidence. It’s good to have a club that is resilient.”

Carpenter and Ellington would score again in the third and put the Horned Frogs ahead for good.

Carpenter led off the inning with a double into the gap in right-center field. Ellington reached base on an error by Loftin, putting runners on the corners. A wild pitch by Bobcat junior starter Michael Russo would score Carpenter and put Ellington on second. Junior first baseman Matt Curry crushed a double to left field to score Ellington and put the Frogs up 4-2.

“We had a lot of good at bats,” Schlossnagle said. “They ran their best pitcher at us. He was getting us with the breaking ball early. I think we had a lot of competitive (at bats) and eventually wore down the pitcher.”

The Horned Frogs doubled their score in the bottom of the sixth.

The inning started with a shot down the left field line for a double by sophomore catcher Jimmie Pharr. Senior second baseman Ben Carruthers followed Pharr with an infield single. With runners on the corners, Carpenter hit a sacrifice fly to shallow center field to score Pharr. Ellington singled to left to score Carruthers. Curry drew a walk; then freshman left fielder Jason Coats hit a single to left to load the bases. Featherston recorded his third RBI of the game with a sacrifice fly to score Ellington. Senior designated hitter Matt Vern hit a single up the middle to score Curry.

Featherston lead the offense with three hits in four at bats and knocking in three runs.

“I saw the ball well,” Featherston said. “I guess me being a freshman I am getting a lot of fastballs, and that is what I have been looking for.”

The pitching staff also did their part in the win, allowing just six hits, two of those came in the first inning.

With a Horned Frog win and a loss by the New Mexico Lobos on Wednesday, TCU jumped into first place in the Mountain West Conference.

“Everything is kind of coming into place,” Featherston said. “We have a deep pitching staff this year and our lineup has a bunch of good bats. It’s going to be tough for someone to come in and shut us out.”

Next up for the baseball team is a road trip against the No. 22 Ole Miss Rebels.

“We are going on the road to face a great SEC program,” Schlossnagle said. “It will be a real good test for our ball club and where we eventually want to be.”