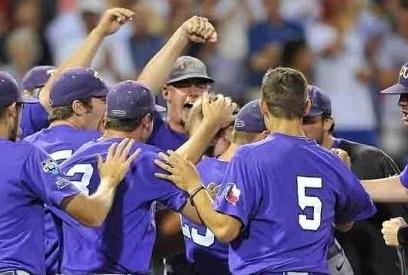 A baseball season filled with victories and great achievements culminated in a trip to the College World Series for the Horned Frog baseball team.

That road included an overall record of 54-14, a dominating run at the Super Regionals, knocking out the University of Texas in the super regional playoffs and making their debut in the College World Series.

The trip to the College World Series meant it was the most successful season in the program’s history.

TCU head baseball coach Jim Schlossnagle wrote in an e-mail the team’s progression through each step and each victory was a great accomplishment.

Chancellor Victor Boschini said, “It was a dream season. I thought that having the chance to go to the College World Series, I mean, that’s a dream come true if you’re a baseball player in college.”

Junior shortstop Taylor Featherston said the team’s No. 1 accomplishment of the season was beating the University of Texas in a best-of-three game series. The series win allowed the Horned Frogs to advance to their first appearance in the College World Series.

With a trip to Omaha finally under the team’s belt, it set the bar high to achieve that goal again and will not stop short of doing what needs to be done, he said.

“We’re itching to get back already,” he said. “Just tasting it and getting there and seeing how things change once you achieve that goal8212;so of course that’s the bar we set.”

Losing to UCLA and being one game away from the finals gave the Horned Frogs even more of a reason to go back and take it all.

Athletics Director Chris Del Conte said he thought the team had some unfinished business at the College World Series.

“We got to Omaha and did a phenomenal job, but once you’ve tasted the opportunity to win a national championship, I think you better watch out for the Frogs this year,” he said.
The “unfinished business” mentality carried through to the team and coaches, as well.

Schlossnagle wrote that he is looking forward to getting his team back on campus.

“The goal was to win a national championship and that leaves us with work to be done,” he wrote. “We are back at ground zero now, so we have to start all over.”

Featherston said he anticipated another great season due to the number of returned players.

“Team chemistry is big and we have a lot of that this year,” he said. “When your team is experienced, it never hurts.”

Featherston said motivation for the team, including the hard work and workouts they put in, will come from their experience at the College World Series.

“All I have to do is be reminded how unbelievable and life changing the College World Series is8212;there’s really nothing like it,” he said. “It’s all worth it in the end.”