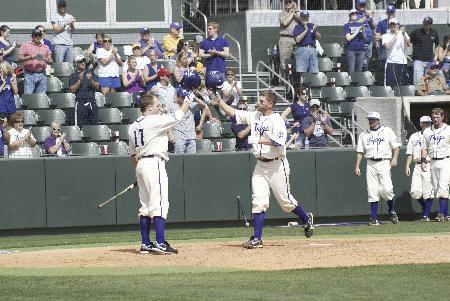 While students were away soaking up rays on a beach somewhere the Horned Frog baseball team was hard at work, playing seven games in nine days.

The Horned Frogs lost their first series of the season March 14 to 16 to the Golden Gophers of Minnesota, two games to one. The first two games were lost with scores of 6-4 and 7-2. The Horned Frogs fell victim to the big inning multiple times during the series, giving up more than one run in at least one inning in each loss. The second game was plagued with bad pitching from the start, beginning with starting pitcher Sean Hoelscher who went 1/3 of an inning and gave up six runs on three hits.

The team did take the final game of the series by a score of 4-1. A lights-out pitching performance from freshman Kyle Winkler kept the Gophers down, allowing the Horned Frog bats to get the job done.


The Horned Frogs relinquished a three-run lead March 17 in the ninth inning to the Oklahoma Sooners to drop their third in four games at home. Freshman pitcher Erik Miller gave up four runs in the ninth to get the loss for the game. Despite the loss, freshman shortstop Taylor Featherston went 5-5 with two doubles and a triple. This loss ended the Horned Frogs’ 116 game win streak when leading after 8 innings.

While March Madness took over the country, the Horned Frogs opened up Mountain West Conference play in Utah on Friday, taking the series two games to one.

A two-run home run in the bottom of the ninth by Hunt Woodruff blasted the Frogs past the Utes in the first game of the series by a score of 8-7. Senior pitcher Taylor Cragin threw a career-high 7 2/3 shutout innings, driving the Horned Frogs to the series-clinching win, 6-1. The team dropped the last game of the series in extra innings, 9-8, despite rallying from a 6-0 deficit to tie it up.

The team is back in action tonight against the Lumberjacks of Stephen F. Austin State University. Despite a 7-13 record, SFA comes into the game having won a series against Southland Conference foe Nicholls State.

The Lumberjacks’ senior pitcher Erich Lehmann set the school record for career strikeouts when he reached 224 in the series against Nicholls State. Senior first baseman Sean Meyers leads the ‘Jacks in almost all hitting categories with an average of .425 with three long balls and 22 RBIs.