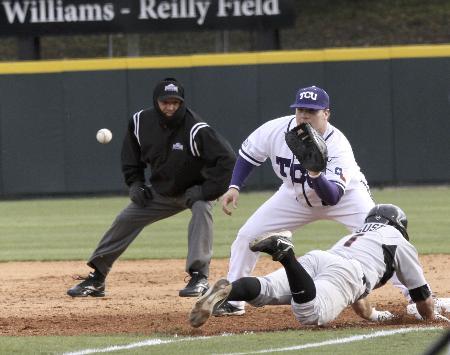 A slumping Horned Frog baseball team hopes to return to the win column tonight at Lupton Stadium against a streaking UT-Arlington team.

The Horned Frogs (15-9, 3-3 MWC) are coming off a disappointing weekend series where the team dropped two of three games to a visiting San Diego State team. The Horned Frogs have now lost four of their last six games.

UTA (15-11) has won nine of its last ten contests, most recently disposing of a Nicholls State team in a three-game sweep in Louisiana. The UTA Mavericks have also found recent success against Northwestern State, Minnesota and UT-San Antonio.

Earlier this month, the Horned Frogs traveled east on Interstate 30 to face the Mavericks in Arlington and walked away with an 11-3 victory. Junior catcher Bryan Holaday had a nice game, going 2-for-3 at the plate and driving in three runs.


Tonight’s game will mark the halfway point of the team’s seven-game home stand.

Following tonight’s contest, the Horned Frogs will host the conference-leading New Mexico Lobos in
a three-game series starting Friday. Next week, the team heads south to face UT-Austin, and UT-Pan American in Edinburg.

The next home game following the team’s round of away games is scheduled for Monday, April 13 against Texas Tech.