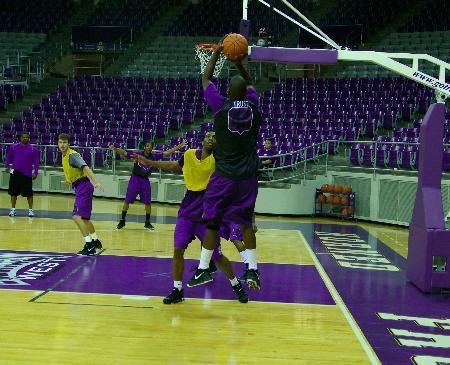 A new era in TCU basketball began Friday night as the men’s team took the court for its first practice of the season. The practice was the first for new head coach Jim Christian, along with seven new players for the Horned Frogs.

Most of Friday night’s practice was spent working on the defensive side of the ball. Several drills focused on transition defense and Christian’s man-to-man scheme.

In the middle of it all was Christian, whose high-intensity style set the tempo for most of practice. Christian, along with his assistants, stressed maximum effort during every drill and communication between the players on the floor.

“That’s the way I am,” Christian said about his fiery demeanor during practice. “I love being on the floor. I want them to understand and see my enthusiasm and start spreading it, and I think it’s starting to spread to the guys.”

Ebie and Langford are not only seen as statistical leaders for the team, but also as emotional leaders and examples for younger players to follow.

“We have a whole lot of new guys, so they look for us to set the tone,” Ebie said. “We have to show them how it’s supposed to be done, because a lot of guys haven’t even played a game yet [in college].”

Christian said in order for Ebie and Langford to lead, the younger players on the team must buy into its philosophy, “Trust the System.”

With a new head coach and so many new faces on the roster, most prognosticators see TCU struggling this season. In many preseason polls, TCU is picked to finish last in the Mountain West Conference. But the Frogs seem indifferent to those who don’t give them a chance.