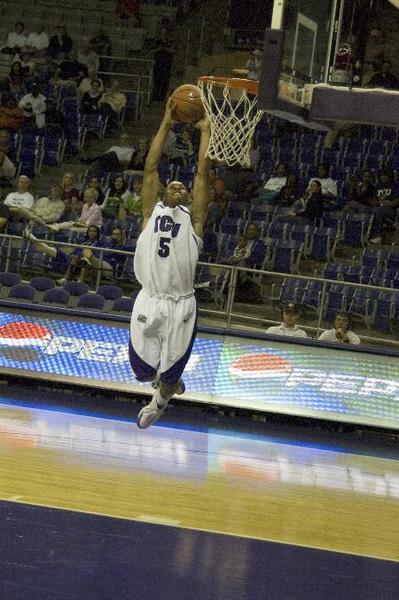 New head coach Jim Christian showed off his tough-as-nails defense in an 81-50 rout of Lithuania Christian University at Daniel-Meyer Coliseum on Monday night.

The Horned Frogs forced 33 turnovers, which they scored 41 points off of. LCU’s guards were flustered all night by senior guard Jason Ebie, who recorded six steals on the night.

“Overall, the effort was fantastic,” Christian said about the defense. “I thought on the ball we were pretty aggressive, pretty good.”

Edvinas Ruzgas, a transfer from Weatherford College, led the Horned Frogs with 14 points. Ruzgas made three 3-point field goals, all in the first half.

Overall, the Frogs struggled shooting the ball. They finished shooting just 36.5 percent from the field, and were 7-29 from 3-point range. However, Christian said LCU’s decision to play a zone defense for a majority of the game had an impact on TCU’s offense.

The game marked the debut of seven new TCU players. In addition to Ruzgas, Kavon Rose, another newcomer, scored in double figures with 10 points.

“He may be the best on-ball defender I’ve ever coached,” Christian said about Moss. “He’s strong and fast, and he makes you uncomfortable.”

The Horned Frogs opened the game with a 19-4 run. They led by as much as 25 points before going into the half with a 41-19 lead. At halftime, LCU had as many turnovers as they had field goal attempts with 18.

TCU dominated in almost every statistical category, including rebounds. The Horned Frogs ended with a 52-35 advantage on the boards and were led by senior forward Kevin Langford, who finished with 13 rebounds and 12 points.

Although it looked strong, both Christian and Langford said the team has room for improvement.

“We just need to execute our plays better, I think,” Langford said.

Christian said the team needed to get down the court faster in transition.

“In the first half I don’t know if we ran as hard as I would’ve liked,” he said. “It is something we need to be pretty good at.”

The Horned Frogs will square off against Western Michigan in the first round of the ESPN Charleston Classic on Nov. 14.

What: TCU vs. Nebraska