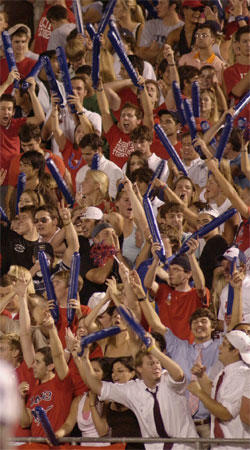 SMU students wearing red “TCU Sucks” shirts cheered loudly as the Mustang band marched down “The Boulevard,” SMU’s traditional tailgate spot, minutes before kickoff in the battle for the Iron Skillet on Saturday night in Dallas.From the looks of it, one would have thought the SMU-TCU rivalry was as fierce as ever, but instead, SMU alumni, students and administrators said the rivalry has lost some steam over the years and now provides simply an excuse for students to let loose.

SMU senior Ben Goerz said the game between the Metroplex rivals allows students to have a good time, but the outcome of the game has little bearing on the mood of students.

“I don’t think it really means much,” Goerz said. “It’s just something fun to make a game interesting. A good rivalry always just inspires some good competition, a good game.”

Arlene Manthey, director of student activities at SMU, has worked at the school for 20 years. She said the SMU-TCU rivalry lost something when the NCAA gave the Mustang football program the death penalty in 1987, eliminating SMU football for two years.

“(The) early ’80s was when SMU was a powerhouse in the football world,” Manthey said, “and then that came to a screeching halt.”

David Hayden, a supervisor at the SMU student center, said the intensity of the rivalry really crashed when the Southwest Conference disbanded in 1996.

“… The whole thing about that was the proximity,” Hayden said. “All the schools were together. Everybody knew each other, and the whole thing was you see the same teams, and you get those numbers building up, where over the years we’re about even in wins of who gets the Skillet this time and who gets it next time.”

SMU and TCU are not slated to play one another next year, something that Manthey and Hayden said is a shame.

Until Saturday’s 21-10 upset of No. 22 TCU, the Mustangs had lost six consecutive games to the Horned Frogs, and had not beaten a ranked opponent since the program returned from the death penalty.

Hayden said SMU’s recent failures in the Iron Skillet series and in general did not diminish the enthusiasm of true Mustang football fans.

“SMU football is waiting to break out,” Hayden said. “One day, the die-hard fans know that this football team is going to return to glory. It’s just flat heartbreaking. You can have the No.1 soccer team – both men and women – you can have great basketball seasons, you can do all that, but Texas is football.