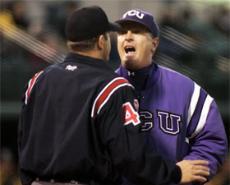 The Horned Frogs didn’t just find a way to lose in Tuesday night’s game at Baylor – they found a lot of them. In a game that featured a dizzying variety of errors, contested calls and sloppy play, TCU fell to an early deficit that would prove too much to overcome in a 10-4 loss.

Neither head coach Jim Schlossnagle nor TCU players were available for comment after the game.

Despite taking an early 1-0 lead, the Frogs’ first-inning defense set the game’s tone, as a series of unusual events left the Bears in a position to get on the board. Senior right-hander Shawn Ferguson walked outfielder Chase Gerdes to start the inning, who moved to second on a sacrifice bunt. Baylor catcher Zach Dillon then singled off the glove of sophomore shortstop Bryan Kervin to put runners at first and third, and outfielder Seth Fortenberry hit a ball off the infield umpire to load the bases.

Designated hitter Matt Sodolak hit a hard ball to Kervin, which was mishandled, allowing Sodolak to reach first and a runner to score. Kervin then also made an errant toss to second, allowing Fortenberry to reach second and Dillon to beat a throw to the plate to put the Bears ahead 2-1.

After the throw home, two Baylor runners were tied up near third base, but sophomore catcher Andrew Walker was charged with an error on the play when he curiously jogged through the infield instead of attempting to throw either out.

Ferguson’s next pitch was wild, then he hit a batter to load the bases. Infielder Ben Booker singled to bring home Baylor’s third run before Ferguson ended the inning with a strikeout.

The second inning would prove to be nearly as ugly as the first, as Ferguson again led off the inning with a walk, then buzzed shortstop Beamer Weems, who appeared to be hit by the pitch and trotted to first.

However, the umpire ruled the pitch did not hit Weems, and he was called back to the plate – but not before the baserunner jogged home during the confusion. Despite Schlossnagle’s protests, the umpires upheld the call, leaving Baylor ahead 4-1.

The Frogs were unable to escape the third unscathed, as well. After a hit batter, single and two stolen bases, infielder Jeff Mandel recorded a two-run single to end Ferguson’s night.

Sophomore pitcher Zach Ashwood was brought in to stop the bleeding, but another infield error – this time on a failed rundown at first – preceded a towering two-run homer off the bat of Kevin Sevigny to stretch the score to 8-1.

The Horned Frog offense scratched across another run in the fourth and two in the sixth, but was unable to put together any other serious threat during the game.

Ferguson’s loss dropped him to 2-3 on the season, and Baylor pitcher Randall Lineaugh improved to 2-0. The Frogs’ next game is against Central Florida at 7 p.m. Friday at Lupton Stadium.