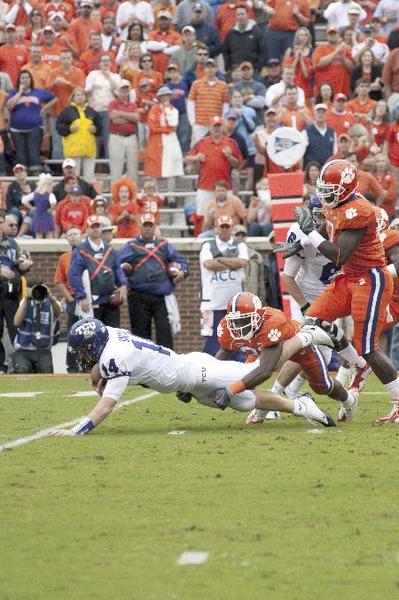 Despite the Frogs’ move up to 11th in the Associated Press top 25 poll, head coach Gary Patterson said he is not letting his players “drink that BCS Kool-Aid.”

After beating Clemson in Death Valley 14-10, the Frogs moved up four spots from No. 15 to No. 11 this week in the AP poll and from No. 14 to No. 10 in the USA Today rankings. However, even just right after celebrating a huge win toward the Frogs’ post-season opportunities, Patterson’s players were still focused on the small, game-to-game picture.

“We can only control what’s out there on the field for us,” senior defensive end Jerry Hughes said about what he thinks the Frogs’ BCS chances could be after the game. “We just go out there and play hard.”

No one played harder than junior quarterback Andy Dalton, who went 17 for 26 for 226 yards, making him the second team member in school history in passing with 5,326 yards. However, Dalton was most effective on the ground, leading the Frogs’ rushing game with 86 yards on 19 carries.

The Mountain West Conference honored his performance with a co-Offensive Player of the Week award. Dalton split the award with Wyoming quarterback Austyn Carta-Samuels, who went 24 of 37 for 234 yards Saturday in a 30-27 win over UNLV on Saturday.

TCU clinched the win in the fourth quarter on a 25-yard underthrown fade from Dalton to Antoine Hicks, who pulled down not only the jump ball for the touchdown, but also Sportscenter’s No. 5 top play of the weekend.

“I thought he scored,” Dalton said about the play being reviewed. “I gave him a shot because the guy was pressed up on him. I thought I would throw it up there and see what he could do, and he came down with it. It was a good touchdown.”

TCU was able to hold off the Tiger offense the rest of the game, making the key stop on fourth down with under five minutes to play in Frog territory. Clemson also missed a field goal earlier in the half keeping the spread at four points.

The Tigers opened up the scoring in the first quarter with a 26-yard field goal. The Frogs countered on the next drive with a 6-yard touchdown pass to wide out Curtis Clay. Right before the half, Clemson took the lead capping of a long drive with a 1-yard run for six by Tiger halfback C.J. Spiller. Frog kicker Ross Evans also missed a 42-yard field goal with 9:32 left in the third quarter which would have tied the game up at 10.

Patterson knows not to get drawn into the BCS hype this week facing SMU, who beat the Frogs after their upset of Oklahoma in Norman in 2005. History could repeat itself this week as the Frogs face the Mustangs in Fort Worth coming off their victory in Clemson.

“You got to take it one game of the time,” Dalton said when asked about the team’s BCS chances. “If we don’t win next week, none of that matters.”