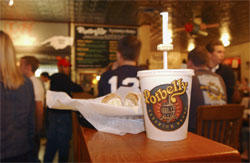 Five contestants, five minutes and $500.In the spirit of National Sandwich Day on Thursday, Potbelly Sandwich Works is hosting the “Belly Buster” sandwich eating contest in nine of its college-town stores across the country, including the store next to the TCU campus.

With a grand prize of $500 cash, contestants will have to eat as many sandwiches as possible in five minutes to win.

Brad Kane, manager of the Potbelly store on University Drive, said it is a fun contest geared toward showing appreciation to its customers.

“It’s a neat way for us to give back to our customers,” Kane said.

With as many as 50 people vying for the chance to enjoy free sandwiches with a hefty pay-off, only a handful will be chosen.

“Contestants have been signing up over the past two weeks,” Kane said. “We have a random drawing to select five people to eat as many sandwiches as they can in five minutes.”

Eric Tabone, a sophomore accounting and finance major, said he is happy he gets the chance to eat for free.

“Who cares if I win or not, I am getting free sandwiches,” Tabone said. “Basically, I am just going to shove as much down as possible, then throw up afterwards. My fellow fans, stand back when I’m done.”

As far as spending the prize money, Tabone said he has recreational plans.

“Other than new ski equipment, I will be taking many beautiful ladies from the TCU campus out for a night on the town,” Tabone said.

Courtney Loechl, a sophomore communications studies major, has been working at Potbelly for about a month and a half and says Potbelly’s not only has great food, but a good atmosphere as well.

This sandwich joint has been serving up local charm, live music and great sandwiches since 1977, according to its press release.

Although the contest is a fun idea, Michelle Fabrega, a sophomore advertising/public relations major, said it does not sound as enjoyable as it could be.

“I would suggest more time to eat the sandwiches,” Fabrega said. “It cannot be as enjoyable because there is so little time.”

“It’s really hard to eat more than one (sandwich) in five minutes, and I eat them all the time.” Loechl said. “It usually takes me my entire 15-minute break to eat just one.”

But Loechl said she has some insight on how to win the competition.

First, don’t chose a sandwich with a big serving of meat, which excludes the Italian and the Wreck.

Second, order the “skinny” version of the sandwich, which has less bread.

Third, drink plenty of water to wash the sandwich down. Soda has too much carbonation.

To top it off, Loechl said to get a milk shake after the contest.

Some students are interested in seeing how many sandwiches can be downed for the contest, which will be at 6 p.m. Thursday at Potbelly’s.

“I think it would be funny to watch people stuff their faces,” said Mary Stillwagon, a senior Spanish major. “Everybody likes them a good sandwich.”

Potbelly’s declined to release the names of those competing in the contest.